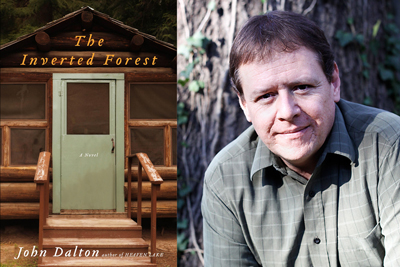 "The Inverted Forest" by John Dalton, associate professor of English at UMSL, will be available July 19.

Novelist John Dalton set out to follow up his critically acclaimed 2004 debut, “Heaven Lake,” with a suburbia-centered book along the lines of “Revolutionary Road” and “The Ice Storm.” The University of Missouri–St. Louis English scholar ultimately took a much different route for “The Inverted Forest.”

“When I sat down to write my second novel, it started out as my fictional take on suburban life in St. Louis,” Dalton said. “But then I started thinking of the summer camp experience I had when I was 19.”

Mining from his memories as a counselor at Camp Don Bosco in Hillboro, Mo., Dalton shifted his book’s plot to focus on the convergence of inexperienced counselors and developmentally disabled campers in 1996 at an Ozarks-based Kindermann Forest Summer Camp. The result, “The Inverted Forest,” is an odd tale of humanity and tragedy told from the point of view of a pair of outsiders and a camp director Dalton called “a prissy, judgmental, foolish man.”

“I ended up really enjoying writing Schuller Kinderman (the camp director and founder),” Dalton said. “But he makes some bad choices.”

The first sets the book’s plot into motion. Kinderman stumbles upon his counselors swimming together naked and fires them. All of them. And he does this just two days before campers are scheduled to arrive.

Kinderman hurries to hire 15 replacement counselors – his second mistake, as the new staff members are not without their flaws. In his haste, Kinderman fails to mention to the new counselors that 104 developmentally disabled adults from the state hospital – not children – will occupy the camp for its first two weeks.

The novel’s other two main characters are a pair of outsiders: counselor Wyatt Huddy and camp nurse Harriet Foster.

Huddy, a 23-year-old with a facial deformity from Apert syndrome, grapples with his physical similarities to the campers. Foster is a single mother, the only African American employee at the camp and the only one familiar with Huddy’s condition. They develop a connection that comes into play when Foster calls upon Huddy to investigate what she perceives to be the malicious intentions of another counselor.

Published by Scribner, an imprint of Simon & Schuster, “The Inverted Forest” will be available for purchase on July 19. The book was a “Beach Read” pick in New York magazine’s summer guide, and it has received advance acclaim in the St. Louis Post-Dispatch and The Wall Street Journal.

Dalton said he sought to write a book for people craving a story that is original, compelling and engaging from start to finish.

“I’m very proud of ‘The Inverted Forest,’” he said. “The novel goes into some dark and uncomfortable places, but its not grim or depressing. It’s got a compassionate center.”

Dalton will read and sign copies of “The Inverted Forest” at 7 p.m. July 21 at Headquarters Branch of The St. Louis County Library, 1640 S. Lindbergh Blvd. in Frontenac, Mo., and at 7 p.m. July 28 at the Chesterfield (Mo.) Oaks Barnes and Nobel, 1600 Clarkson Road.

Dalton grew up in Manchester, Mo., and worked as a counselor at camps throughout the Midwest and New England. The UMSL alumnus (BA English 1987) now lives with his family in Olivette, Mo., and is an associate professor of English at UMSL. Starting in August, Dalton will serve as the director of the MFA in Creative Writing program at UMSL.

“Heaven Lake” (Scribner), Dalton’s first novel, was about a disgraced missionary who journeys to the desert province of Xinjiang in Taiwan. It won the Barnes and Noble 2004 Discover Award in fiction and the Sue Kaufman Prize from the American Academy of Arts and Letters. The novel was also listed as a best book of the year by Publisher’s Weekly, The Chicago Tribune and the St. Louis Post-Dispatch.