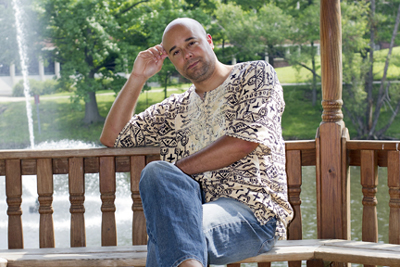 Matthew Taylor, assistant professor of psychology, earned his doctoral degree from UMSL. He returned to his alma mater in 2006 and just completed his latest research comparing the relationship between youth sports participation and delinquency in African American females.

Matthew Taylor can sympathize with his students when they talk of the outrageous St. Louis weather, traffic on their way to class and the family of geese to steer clear of on campus. Taylor, an assistant professor of psychology at the University of Missouri–St. Louis, was once a graduate student at UMSL. He sat in the very same seats as his students to earn his doctoral degree in clinical psychology in 1997. He then went on to teach at the University of Wisconsin-La Crosse for seven years, but when he learned there was an opening at UMSL, he decided it was time to return to the place he first became passionate about research and teaching.

UMSL Daily recently sat down with Taylor, a resident of the St. Louis neighborhood of Dogtown, to talk about returning to UMSL and his current research on the role sports play in shaping the lives of young African American females.

As a UMSL alumnus, how has your experience been returning to campus as a faculty member?

The experience has been great. I’ve always had fond memories of my graduate student years in St. Louis and at UMSL, so the move made perfect sense. There was immediately a degree of comfort both in the department and the city. Being on the other side professionally has been enjoyable. A few of my current colleagues were previously my professors, so it’s been intriguing to be positioned to relate to them differently. Many have overtly stressed that we are colleagues and the old student-professor dynamic is gone. It’s actually a lot more fun, to be honest. I can be myself more freely and let my nonsensical side out a bit more. But, both the department and the campus have changed a great deal, so as much as it has been akin to coming home, it’s truly a new place and environment.

What do you think is unique about the Department of Psychology at UMSL?

We have a very diverse collection of faculty skill sets. Providing for the most majors in the College of Arts and Sciences, we have top notch researchers with varied research agendas who also excel in teaching. We have seen a number of new hires since I arrived in 2006, so we have been positioned to redevelop our identity in some ways. One of the elements of the department that drew me back is its community involvement which parallels a core part of the university mission. I think as a large urban public university, it is of the utmost importance that we develop and maintain close ties with the St. Louis community. A lot of us are actively involved in community endeavors that serve to facilitate these critical linkages.

Your area of expertise focuses on minority mental health. Why is that your area of interest?

What I like most about my focus on minority mental health is that it requires the utilization of other disciplines such as sociology and anthropology. It is important to understand that culture plays a significant role in psychological functioning, and in my lab we focus a great deal of our attention on it. As I tell students, while a biological focus on mental health is noteworthy, it’s only part of the puzzle. Remember that we are brains, in bodies, that exist within families and communities, and these sociocultural influences impact our functioning as much as our biology.

You’ve recently completed research with your students on the relationship between youth sports participation and delinquency in African American females. What were your main findings?

This study explores the role of sports in the lives of young girls. I have two daughters who are athletes, so I have always been intrigued with the benefits or detriments that they may receive as a result of their participation. We have made it a point to focus our attention on minority girls and in, particular, those living in rural locations. The results of our work suggest that sports are not always the panacea that society thinks they are. A number of positive outcomes were noted. Increases in school adjustment and self-esteem are two. Additionally, girls who played sports were less likely to be victims of violence and sexual assault. However, other data suggested less favorable outcomes. Girls who played sports were more likely to drink and respond with aggression when angry.

How would you like to expand your study in the future?

The next step in this work involves a more detailed exploration of the meaning behind the sports participation of these girls. For example, are sports less impactful for those participating merely as something to do to pass time or socialize with friends? Compared to those athletes from rural locations who may see sports as a vehicle to go to college and move away from the town. Another area of expanded focus will be how the type of sport impacts these outcomes. Do individual sports produce different outcomes than teams? And finally, we want to focus more attention on the role and impact of community-level characteristics like poverty, industrialization and education attainment, as rural locations have gone through a great many changes since the farm crisis of the 1980s and seen shifts in economics, community resources, and demographics.