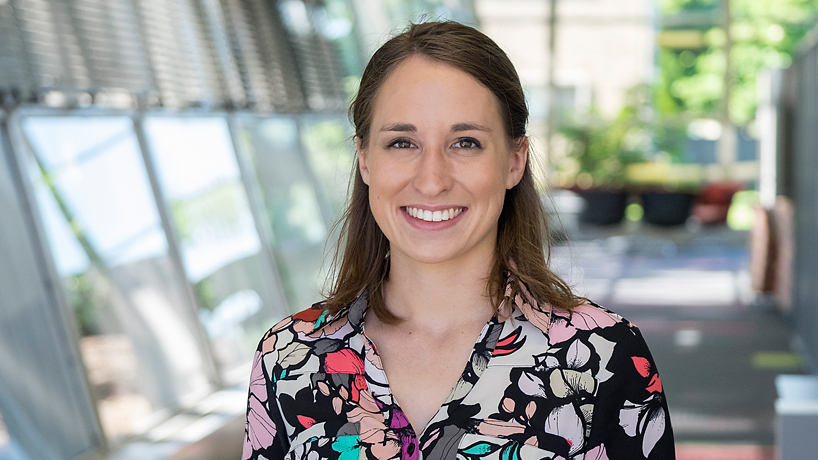 Kara Long will present on child advocacy and public policy at the Missouri Association of School Psychologists’ annual conference this November. (Photo by August Jennewein)

Kansas native Kara Long has not always pictured herself as someone who could be at the center of far-reaching discussions on child advocacy and public policy. But as her knowledge and passion for both subjects has grown, so too has the duty she feels to share what she’s learned. She will soon have the opportunity to do just that.

Long has been invited to present at the Missouri Association of School Psychologists’ annual conference this November, an event which will take place at the University of Missouri–St. Louis. According to Michael Bahr, Long’s adviser and mentor in the College of Education, the opportunity is no small feat.

“In my 25 years working in academia and with state associations, I’ve never seen an invitation of this nature extended to an early-career graduate student,” Bahr said.

Although the invitation is impressive, perhaps it’s not surprising. The second-year school psychology student has already made quite a name for herself at UMSL. From taking the lead on the creation of a database for an important research project, to being elected as the president of the UMSL Graduate Association of School Psychologists, Bahr says Long has shown exemplary leadership skills and initiative.

In fact, it was Long’s own initiative that led to her attending another prestigious conference this past July – the National Association of School Psychologists’ Public Policy Institute in Washington D.C. The expertise she gathered in D.C. will provide the focus for her presentation this fall.

Long’s interest in advocacy and public policy is a somewhat unexpected development. It’s one she says has grown in large part because of her choosing to study in the St. Louis region in particular, a place that lends itself to learning about the types of struggles students from a wide variety of backgrounds face. One of the items on her advocacy list is seeing states like Missouri evolve toward fully embracing and utilizing the breadth of skills that school psychologists can bring to the table for all students.

“From counseling services to academic interventions and prevention work that leads to creating safe schools, we can really do a lot of cool stuff that some schools aren’t aware we can do,” Long explains. “So I’d really like to see that aspect transformed in states like Missouri.”

She won’t have to wait long to get involved. This semester Long begins her practicum experience in the East St. Louis school district, and next year she’ll have a year-long internship to complete. When pressed about the scope of her advocacy beyond her program requirements, however, Long admits that while she may be starting with her studies in school psychology, she likely won’t end there. Her long-term plans include pursuing a doctoral degree in public policy with an emphasis in diversity and potentially working for change at the federal level.

This concept of “all students” is an especially important one for Long. Part of what drew her to UMSL in the first place was her program’s emphasis on cultural competency and the related belief that every child’s environment and circumstances can be contributing – but should never be limiting – factors in the larger picture of who they are and what they need.

To that end, Long’s ultimate goal is to help create educational environments that are “not only free but appropriate for every child – environments where every child gets what they need regardless of where they come from.”

When asked where she gets her hope that such change is possible, Long is quick to give credit to those around her.

“There are so many talented, passionate young people who care deeply about children,” she says.

Long believes in the collective power of the students and professionals she’s already been fortunate enough to meet, as well as in the notion that those dedicated to helping need only be given the tools and support to do so.

She says she’s further buoyed by the everyday strategies she’s learned for getting started in the here and now – strategies she picked up in D.C. and will share with her audience this fall.