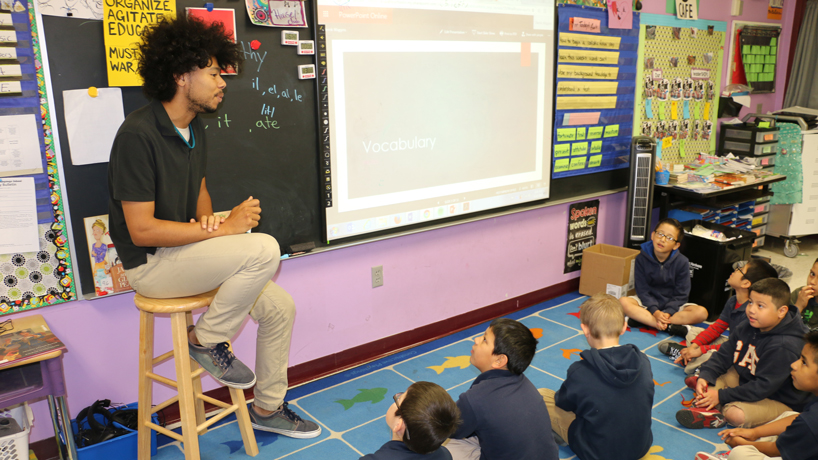 Derrik Wiggins is one of two UMSL College of Education alumni who recently received Teacher of the Year awards from their respective school districts in Missouri. (Photo courtesy of Kansas City Public Schools)

As the school year came to an end in May and students and teachers alike began to look forward to summer plans, two different educators in two different parts of Missouri found themselves in a spotlight they never expected.

Derrik Wiggins and Katelyn Freiert, who both hold master’s degrees from the University of Missouri–St. Louis College of Education, were each named Teacher of the Year in their respective school districts.

Wiggins received the honor in Kansas City and was celebrated during a May 1 ceremony held at the Kauffman Foundation.

Freiert received the accolade in St. Charles County and was honored at a May 23 all-school assembly.

Both young educators have only been teaching for four years.

Offering free home tutoring, learning Spanish to better communicate with his students and their family members, volunteering with organizations like Big Brothers Big Sisters and finding time to serve on his school’s Parent Teacher Association are just some of the ways that he commits himself to his students.

During his acceptance speech, Wiggins spoke of what an honor it is to be an educator.

“The truth is, education is power,” he said. “It’s the power to determine a mindset, a knowledge, a culture, social behavior, class, importance. We have the honor to be able to give that to our students every day.”

Wiggins graduated from Kansas State University in 2012 and then became a Teach for America corps member, which is how he found his way both to Carver and to UMSL.

UMSL has been a university partner of Teach for America since 2006 and has been providing an avenue for Kansas City corps members to achieve both certification and master’s degrees through innovative online options since 2008.

Wiggins completed his master’s degree in elementary education from UMSL in 2015.

He was completely taken aback by the Teacher of the Year award and quick to give credit to fellow educators.

“There are a lot of great teachers here who I look up to,” he told the Kansas City Star’s Mará Rose Williams. “I’m still trying to acquire a lot of the skills they have.”

Carver’s principal, Michael Coulter, who also spoke to the Star, said of Wiggins: “He is one of the best young teachers I have ever worked with, and I have been doing this work for 27 years.”

Freiert, who was nominated by the parent of two of her students, received the honor for her work as a special education teacher in an intensive language and behavioral supports classroom at Ostmann Elementary in the Fort Zumwalt School District.

“I just think what makes Katelyn stand out is her passion, number one,” Jennings said, “and her willingness to not set limits on anyone, and then just the relationships she builds with students and parents.” 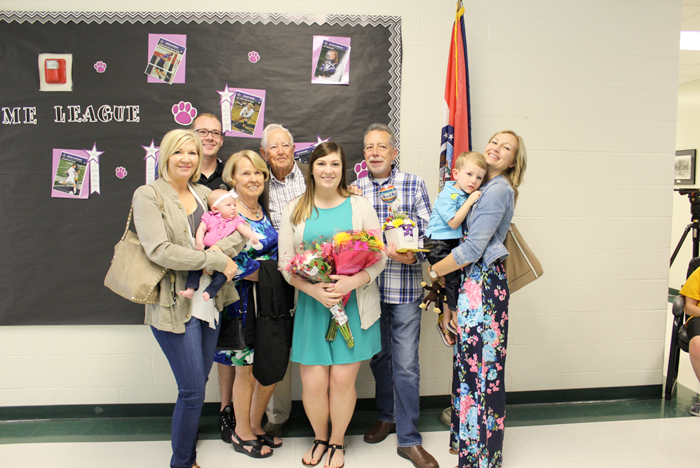 Freiert said that though she didn’t know exactly what she wanted to do back when she first began her undergrad studies at the University of Missouri–Columbia, working with children with special needs was always at the front of her mind.

The time she spent volunteering – first with the Special Olympics and later with Variety of St. Louis – helped convince her that special education was right for her.

After her first year at Ostmann, it was a desire for further education and expertise that led her to UMSL.

“I became very interested in learning more about Applied Behavior Analysis since I had been using many of those principles with the students in my classroom,” Freiert said. “I found an ABA program at UMSL, so I decided to start my master’s and work towards that goal.”

Last summer, Freiert completed that mission. She earned her master’s degree in special education with an emphasis in autism and developmental disabilities – but she didn’t stop there. She’s currently working toward completing UMSL’s graduate-level Board Certified Behavioral Analyst program as well.

“I’m changing roles a little bit, but I’ll still be a teacher,” she told Uptergrove. “I’m really excited to be able to focus in on helping to change behaviors and teach kids replacement behaviors that are more appropriate.”

Of the award itself, Freiert said she too was more than a little surprised.

“It was very overwhelming to receive an honor like this when I know that there are so many other deserving teachers out there. It feels amazing to be recognized for a job that I love doing. I couldn’t be more grateful for everything that my students teach me each and every day.”