Nursing alumna Lisa Meadows aims for change, one child at a time 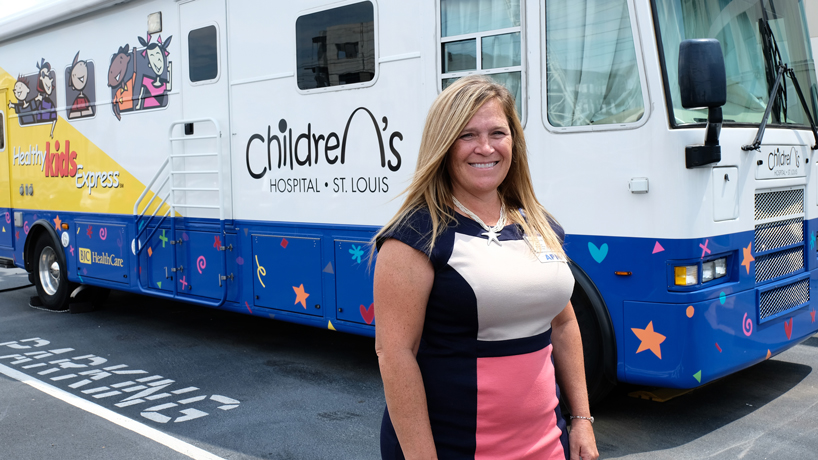 There was a time when Lisa Meadows wasn’t quite sure if nursing was the right path for her.

After growing up in Ferguson and Cool Valley, Missouri – near where McCluer North High School now stands – she became the first person in her family to ever go to college.

“I really didn’t know what I wanted to do. I just knew that I wanted to study,” she says. “Then one day someone said, ‘You know you really ought to think about being a nurse. It’s a good job – lots of opportunities.’ I said, ‘Okay. I’ll give it a try.’”

Even then, Meadows wasn’t immediately certain it was the right fit.

“I was going through all the different rotations in nursing school, and I would say to myself, ‘I don’t know why I did this,’” she recalls. “But then I got to pediatrics. That was it. I knew it was for me.”

Meadows went on to complete her bachelor’s in nursing and then earned her master’s from the University of Missouri—St. Louis, graduating as a pediatric nurse practitioner in 1997. The choice to pursue that advanced education, she says, has changed the trajectory of her life.

Now, twenty-five years since discovering the specialty area she first fell in love with, her passion for helping children has taken her on quite a ride – literally.

The program is one Meadows helped create years ago, by way of developing the mobile asthma unit it began with. Her new role is one she absolutely loves, and one that allows her to focus on something that has fueled her entire career – a desire to deliver quality health care to diverse and underserved populations.

“Early in my career, I had a vision of advancing patient care by nurturing collaborative relationships and making improvements in medical culture,” she says. “That’s what I set out to do then, and it’s what I still get to do now, in many ways.”

Exactly how she goes about it looks a little different every day.

Sometimes she’s mentoring other nurses. Often, she’s meeting with multiple community partners, like local school leaders or folks from the International Institute. At least once a month, she’s on one of the Healthy Kids Express vans delivering direct care to children and families around the city. No matter what, their stories and their needs are at the forefront of everything she does.

“Services like what we provide are so needed,” she says. “Families may be in the position where they have to decide, ‘Do I keep my electric on or do I feed my kids? Do I use one medicine for all of my kids, because I can’t afford more?’ We’ve all watched families have to make really hard decisions. And I’ve been able to witness first-hand how disparities impact neighborhoods, how poverty impacts the actions of others. That stays with you. It drives me to create change.”

That drive has kept Meadows busy with multiple initiatives over the years, both before and during her work with Healthy Kids Express.

She was instrumental in creating the Pediatric Ambulatory Wound Service (PAWS) which has now been implemented in three area hospitals and ultimately helped change the way burn care is administered to children in St. Louis. She’s traveled across the state to teach school nurses how to care for children with advanced medical needs. She’s worked extensively to strengthen the delivery of care to immigrant and refugee populations in St. Louis. Administratively, she’s mentored countless nurses and led entire departments through the difficulties of layoffs and budget restrictions, all while never losing sight of the person behind the nurse’s uniform.

In short, the many hats she’s worn under the nursing umbrella have amounted to far more than she ever imagined possible when she was just a student.

“I really had no idea about all of the different paths that were available. We have so many different specialties and areas of expertise,” she says. “You really can do whatever you like. And just because you specialize in one thing today doesn’t mean you can’t learn something else on another day. You’ll learn, and then you’ll keep learning. I’ve found that being a life long learner has been extremely important. It allows you to stay relevant.”

All of Meadows’ years of experience have helped her hone something else that’s kept her relevant too – a resilient leadership style. In fact, she was honored with a 2016 Nurse of the Year Award from the Missouri Chapter of the March of Dimes, largely because of her ability to continually energize and motivate others.

“My philosophy is definitely hands off,” she says. “I’m empowering employees and giving them tools to be successful and to stretch themselves to learn. If I’m doing that correctly, I could walk right out the door and they’d never skip a beat.”

When Meadows is asked where she gets her own motivation, where her personal reserve of what she calls resiliency comes from, she’s quick to say she’s honestly not sure.

“I wish I could answer that,” she says with a smile. “I would love to tell you some of it comes from my grandmother, who gave me that constant, ‘You can do it, you can do it.’ So maybe that.  But, honestly, I don’t know how I have it. I just know that I do.”

Giving it some more thought, Meadows returns to the core goal that’s always been at the heart of her work, the one she shares with her Healthy Kids Express team.

“I want to make a difference when it comes to disproportionate care, and I know I can’t do that alone. But if I can bring together different people and resources – to me, if I can make a difference or promote resiliency in one child’s life, I have a feeling that will carry on.”