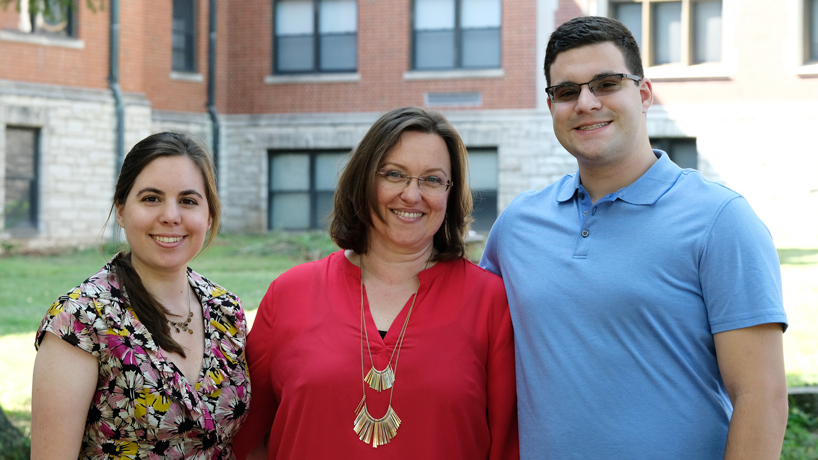 Now in the third year of the optometry program at UMSL, Alexandra Gada (center) is a Triton alongside two of her children, Olivia (at left) and Paul. (Photo by August Jennewein)

Many years ago, University of Missouri–St. Louis student Alexandra Gada was very close to completing dentistry school in her home country, Ukraine. But then life – and love – had other plans.

A chance encounter during a family vacation to the United States led to Gada meeting the man who would become her husband.  They eventually married and she moved to America.

The years of education Gada received in the former Soviet Union didn’t quite transfer to the suburbs of northern Chicago and so, eager to start her family, she chose to complete dental hygienist school.

“I always knew I was going to do something else,” she explains, “except I really wanted to be a mom first, and since I had three kids, it took a long time to be a mom.”

For 17 years, she enjoyed raising her children – and enjoyed interacting with her dental patients – but kept in the back of her mind thoughts about what else she could pursue.

She explored every health-care profession she thought she might be interested in, and nothing seemed quite right, until one day when she took her daughter in for an eye exam.

“There is no optometry profession in Ukraine,” Gada says. “There are medical doctors who specialize in eye diseases at medical school, but it’s just not the same as it is here, so I wasn’t familiar.”

When her daughter’s optometrist entered the room, Gada was confused.

“I looked at the credentials, ‘OD,’ and I didn’t know. I thought maybe the ‘O’ stood for osteopathy. I thought his nametag was reversed, so I pointed it out to him,” she says, smiling about it now. “Of course, he said, ‘No, it stands for optometry doctor.’ I said, ‘What’s optometry?’ By the time I was home that day I was thinking to myself, ‘I know what I’m going to do.’”

Fast forward a few more years, and Gada would find herself relocated once more, this time to St. Louis, Missouri.

“We moved here for my husband’s job, and suddenly optometry school was 15 minutes up the road. I really, truly, had no more excuses.”

Now in the third year of the optometry program at UMSL, Gada says she still asks herself after each semester, “Am I still glad I’m doing this?” Her answer is always a resounding yes, for many different reasons.

The wonder of sight and science

“It’s such a beautiful thing when you can hand a person sight. Especially a child. Suddenly they look outside and those are individual leaves on the trees. It’s a wonderful feeling.”

Of course, her newfound profession is much more than that, too.

“I think that’s the biggest misconception people have. They don’t realize that a big part of our exam is not just figuring out a prescription, but overall eye health – looking at all of the structures. There are so many conditions that happen in the eye or that can affect the eye. I’m fascinated by all of it.”

“Everyone talks about how we’re a family here in the optometry program, and it’s true. I’m very proud of my class. They’re a wonderful group of young people. They make me feel very young because they’re very inclusive. I’m the oldest one in class, but sometimes I forget how old I am.”

Then, there’s her patients.

“They’re my biggest passion. I think you have to love people. You can’t just think, ‘I like science and that’s why I’m going to go into a health profession.’ Truly, I feel that’s the wrong reason. If you can’t talk to people, communicate, explain and give back to them what you learn in school, it’s wrong. That’s why we’re here.”

A deep love of learning

“I’m a nerd at heart. The whole class knows this because even when I have free time, I’m reading something – journal articles, magazines, anything that relates to the profession of optometry. I genuinely want to know and want to learn. That’s just me.”

That passion for knowledge is something Gada believes is essential for anyone wanting to go back to school later in life.

“I love school and the process of it. I think that for people who are thinking, ‘I’ll just hunker down and get through it and make more money,’ that’s not it. That’s not a reason to do it. You have to love to learn.”

“Two of my three children are now in school here at UMSL also. My son Paul is in the nursing program, and my daughter Olivia is actually starting optometry school this year – but we won’t have classes together. I think that’s a good thing. I only say that because I want her to have her own experience and be her own person. I don’t want my kids to live in the shadow of, ‘Mom did this.’ But it is wonderful. I love us all being here. It has really given me perspective on what they go through. And I think they have a new appreciation for me knowing what I’m talking about. They can’t say, ‘Oh, you don’t know, mom.’ Because I do know. I’m doing it.”

The gift of a fresh start

“You know, they say you come to the United States for your dreams and all of that. I will say it really is amazing, because the opportunities I’ve had here, I probably would not have had had I been back home. How many women of my age, anywhere in another country, could say they went back to school to get a new career? I think it’s an awesome thing that the ability is there. There are many countries where you just cannot ever think of doing it. It’s unheard of for people to go back to school and change what they do. Once you’re done, you’re done. For me, it feels like a second chance.”