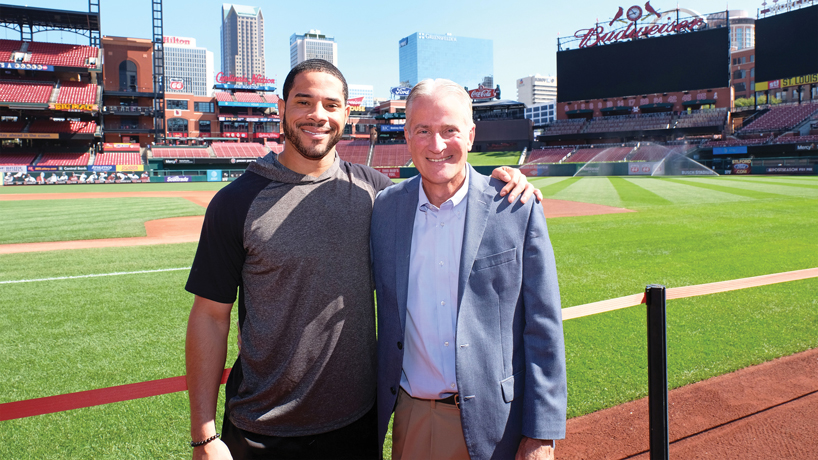 St. Louis Cardinals outfielder Tommy Pham (at left) relies on Dr. Ed Bennett, a UMSL optometrist, to help monitor his vision and fit his contact lenses since undergoing a procedure for keratoconus. (Photo by August Jennewein)

“Mike Shannon hit a home run, the Cardinals beat the Yankees, and I was crying,” says the University of Missouri–St. Louis professor of optometry, who confesses he was then a Yankees fan. “But within a year or two, I was a Cardinals fan. All the way.”

Bennett couldn’t have known then that more than five decades later, a Cardinals outfielder would rely on him for help with his game, yet that’s exactly what fate had in store.

These days, should Tommy Pham find himself having trouble seeing any of the details inside Busch Stadium, Bennett is his go-to guy.

Pham has keratoconus, a condition that, over time, warps the smooth, curved surface of the cornea – the part of the eye most responsible for sight. The distortion causes a scattering of light, corneal scarring and, for some patients, loss of vision.

Though a treatment procedure several years ago helped stop the progression of the disease, Pham still needs assistance with contact lenses and the monitoring of his condition. When the Cardinals are in St. Louis, Bennett steps in.

“I love Dr. B.,” Pham says. “He’s very caring, very genuine. He’s someone who wants the best for his patients and truly wants to help. To me, that says everything about a person.”

As Bennett has treated Pham, the two have begun to work together to build awareness about keratoconus.

In September, Pham received the first-ever Ambassador Award from the National Keratoconus Foundation. It was Bennett who helped present the honor.

“He’s worked so hard and been such a wonderful role model, especially for kids,” Bennett says. “He’ll make a wonderful ambassador.”

On a sweltering day in July 2016, baseball fans nationwide were enjoying the All-Star game. But somewhere between Missouri and Iowa, Pham and Bennett were on the road together, driving toward a potential new pair of contact lenses.

During conversation Pham shared which books he likes to read.

“Without exception, every one was a self-improvement title,” Bennett says. “I was fascinated. It struck something in me. I said, ‘Well, you know, I teach a communications course to my second-year optometry students. It’s built around a self-assessment tool called the StrengthsQuest.’”

Pham turned around and pulled a copy out of his bag. He’d already done the test.

“That’s the heart of Tommy Pham right there,” Bennett says. “I’ve never seen anybody more dedicated to self-improvement. No excuses, plays every game like it’s his last. It’s really quite remarkable. All I want to do is help keep that dream going.”