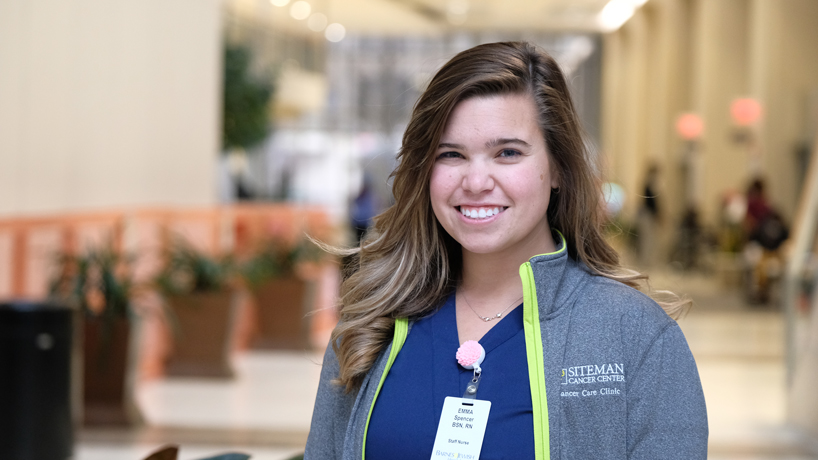 Emma Spencer is back at UMSL pursuing her second degree, a DNP, from the College of Nursing. She hopes to use the leadership-focused doctorate to become a voice for change in health care systems statewide. (Photo by August Jennewein)

University of Missouri–St. Louis doctor of nursing practice student Emma Spencer believes access to proper health care is a right – one she’s determined to fight for on behalf of every Missouri patient she meets.

Spencer developed her belief while working as a nurse navigator at SSM-St. Mary’s Hospital, a role she took on after earning her first UMSL degree, a BSN, in 2014. The key to the still relatively new health-care position was in the name – listen to chronically ill patients’ fears and concerns about gaps in their care and help them find ways to navigate them.

Often that goal meant spending hours trying to identify community resources. Often it consisted of calls to insurance providers with distraught patients at her side.

“I quickly began to see that many people – especially our most vulnerable populations – need much more help than what we can financially offer in our hospitals,” Spencer explains. “I would have these conversations and make these calls and still, with all of my education, experience and training, not be able to understand the answers about policies that my patients were being given. That just did not sit right with me.”

In answer, Spencer returned to UMSL to pursue a DNP with an emphasis in leadership, population health and health-care systems. The unique course of study includes a 1,000-hour residency in the communities she most wants to impact and allows her to deep-dive into the social determinants of health – like food scarcity, transportation issues and socioeconomic status – that play a key role in keeping people from the care they need.

“What it comes down to for me is that we can’t leave people out when they come to us for help,” says Spencer, who currently works as a registered nurse at Siteman Cancer Center. “If a doctor is prescribing it, a patient should be able to access it.”

Spencer’s advocacy has taken her beyond academics and into the political sphere as well.

Last July, she joined the board of Missouri Health Care for All, a nonprofit, nonpartisan, statewide organization that advocates for health care reform through grassroots initiatives. As part of the Health Care Listening Project, Spencer continues to focus on Missourians and their needs.

“We want to reach out to voters and have genuine conversations about their health-care experiences,” she says. “The purpose is to make sure that we understand every Missouri voice, what barriers they face, and what works for them.”

She and fellow board members take those voices to the state legislature and magnify them during lobby days in Jefferson City. The political environment may be new for a nurse, but according to Spencer, it’s exactly where she and other nurses need to be.

“Most people – including me at one time – wouldn’t put nurses and politicians together,” she says. “But I think that’s something that needs to change. UMSL instilled in me that as nurses, we should be leaders in the community. I want to be that powerful voice.”