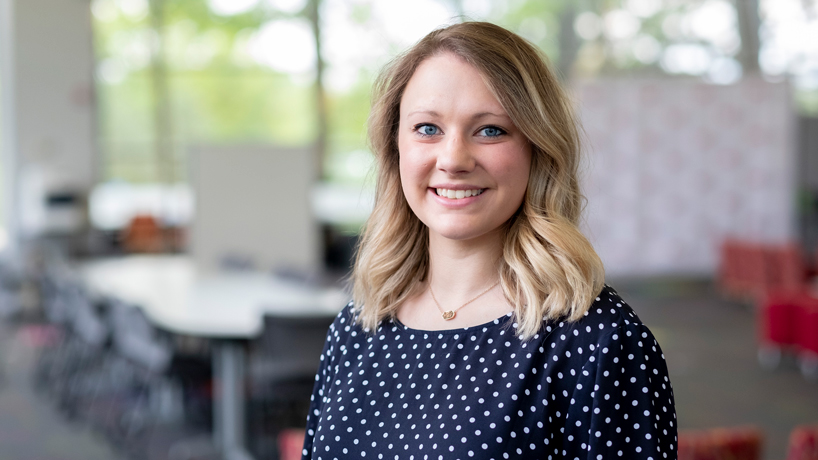 People usually give Caroline Gallaher the same look when she tells them she wants to be a middle school math teacher.

It’s a knowing mixture of sympathy and pity.

“They just kind of roll their eyes and say, ‘Oh man. Bless you,’” Gallaher said.

Middle schoolers are traditionally a difficult bunch to manage. They’re right at the point where hormones are starting to kick in, children are becoming adolescents and none of them really know how to deal with what’s going on.

To Gallaher, though, that’s the fun part.

“The kids are awkward,” she said. “They’re dealing with social problems. They’re coming into themselves and learning how the world works, so you can be fun and silly with them, but you also have to teach the content. I feel like student-teacher relationships are the strongest in middle school. I feel like I want to help, and middle school is the area where you could make the most impact.”

Gallaher gained this appreciation for teaching middle schoolers through volunteer work with St. Louis Public Schools students at the nonprofit Mission: St. Louis and through her two practicum semesters at Senn-Thomas Middle School in Herculaneum, Missouri, about 30 miles south of downtown.

“What’s really going to set her apart is her commitment to learning,” said Debbie Ponder, the UMSL College of Education clinical educator based at Jefferson College who served as Gallaher’s practicum advisor. “Her compassion for children is going to set her apart. She notices students’ needs, assesses students very well and she’s compassionate toward the students who require differentiation. And it’s also her poise and confidence. That’s going to take her far in education.”

Gallaher originally planned to graduate in the winter. But last Aug. 29, just three weeks after getting married and two weeks after the start of her second practicum semester, she was involved in a severe car accident.

She thought she could return to school after a few days of recovery. Her doctors advised strongly against that.

“I was thinking she had a fender bender,” Ponder said. “Then she started describing the accident to me and I was like, ‘Oh my good heavens.’ It was pretty horrendous. My heart just broke for her.”

The second practicum semester is more intensive than the first. It involves four days in the classroom instead of two and gives the teacher candidates a chance to take control of lesson plans and class periods instead of largely learning and observing as they did in the first semester.

Gallaher worked with Ponder and Senior Director of Clinical Experience and School Partnerships Stephanie Koscielski to put off her second practicum semester without having to withdraw from school. Gallaher even took it upon herself to read and absorb the teaching strategies text that the rest of Ponder’s advisees were using for a book study as she recovered last fall.

But the semester away was still tough on her.

“I was trying to push through, but that was not the best decision,” Gallaher said.

She returned to the classroom in the spring and picked up where she left off before the accident.

Ponder and Koscielski’s support during the ordeal was an extension of the environment she had enjoyed ever since she stepped on campus as a transfer student from Truman State University two years prior, a climate of care that extended from her advisors to instructors such as Cathy Vatterott and Amber Candela and all points in between.

“I was overwhelmed with how ready everybody was to help,” said Gallaher, who earned the UMSL Gateway Transfer Scholarship during her undergraduate career. “I could tell their priority is to create the best teachers they can. When I was really struggling, they were able to support me, be really understanding and help me get to where I am now. I’m very appreciative of what they did.”

She plans to one day go back to school and get a counseling degree so she can work with students in that capacity. Whatever Gallaher does, she wants to make meaningful connections.

“I like interpersonal communication. I like working with people,” Gallaher said. “When it comes time to be a counselor, I can speak to those experiences I had working with kids in the classroom. Teaching seemed like a really good starting point for me, and I’ve loved it.”