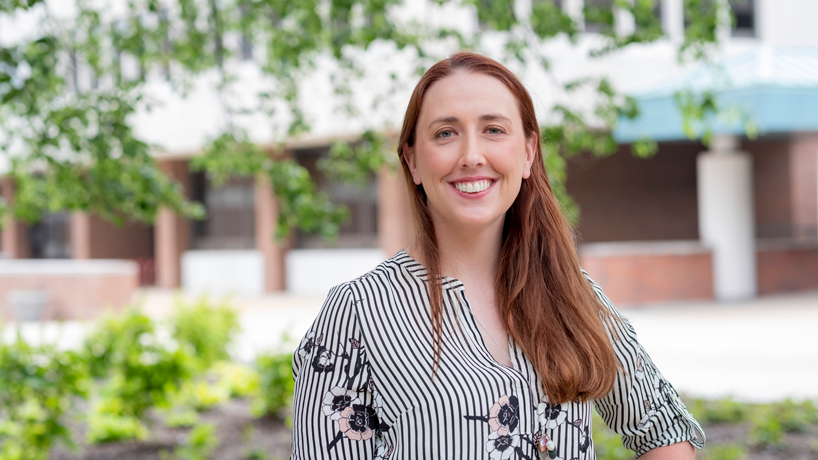 Amanda Lilly, who earned her MA in communication from UMSL this spring, is moving on to a PhD program at Purdue University. She hopes to one day return and be a professor at UMSL, where she found an “amazing, inclusive” community. (Photo by August Jennewein)

On the first day of new student orientation in the summer of 2017, Amanda Lilly received just about the worst news imaginable.

Her father, Edwin Moore, had been diagnosed with four different types of terminal Stage 4 cancer: thyroid, throat, lung and brain. Doctors gave him about four months to live but nearly two years later, as Lilly neared completing her MA in communication at the University of Missouri–St. Louis, he was still holding on.

She scheduled her master’s thesis presentation for early April in the hopes that he could attend. As his health took a turn for the worse, that plan shifted to Associate Teaching Professor Shannon Ahrndt recording Lilly’s presentation so Moore could watch it later.

He passed away March 31, just a few days before the presentation. Department of Communication and Media Graduate Program Director Amber Reinhart offered Lilly an extension, but she wouldn’t take it.

“She has overcome a great amount of adversity and kept focused,” Reinhart said. “I’m really impressed by everything she’s been able to do despite all the things that have been in her path.”

Lilly graduated from UMSL this spring and will start a PhD program at Purdue University in West Lafayette, Indiana, in the fall. She is the recipient of a highly competitive Ross Fellowship, a four-year scholarship package that Purdue awards to some of its most outstanding candidates.

That comes as no surprise to those who worked with Lilly during her two years at UMSL.

“She has really high standards. She upholds both personal expectations and those that other people put on her,” Ahrndt said. “She doesn’t want to let anyone down and always gives 110 percent. She sets a really good example for people around her in terms of how to be a good student, how to give it your all.”

Putting in the time
Lilly was Ahrndt’s first teaching assistant after the professor started at UMSL. The two worked closely together in two of Ahrndt’s courses for three of the past four semesters.

Starting to notice a trend?

“There are people who check the box and do what you ask them to, but she’s always going to go above and beyond,” Ahrndt said. “Instead of putting her 20 hours in and peacing out, she’s willing to spend that extra time to get that extra practice and knowledge.”

From the time she was an undergraduate at the Mississippi University for Women in Columbus, Mississippi, Lilly knew she wanted to be a university professor. She earned her bachelor’s in 2009 and took her time before continuing on to graduate school.

At UMSL, she served as a TA for five different courses, did two studies complete with data collection and analysis for her thesis – you only have to do one – and authored papers with Reinhart. 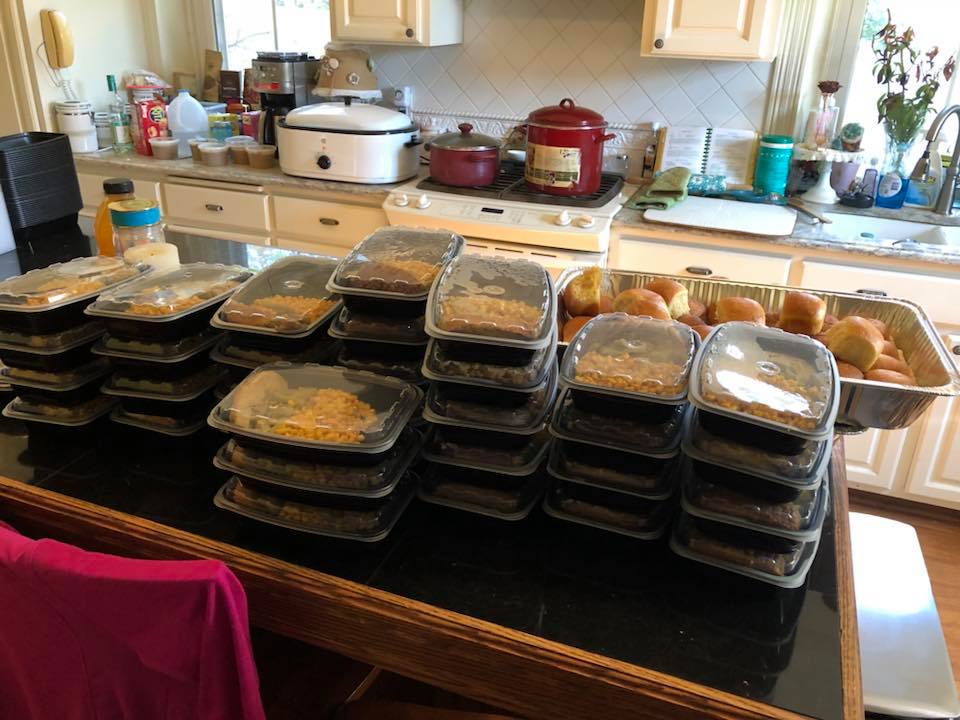 Amanda Lilly and her roommate, Jessica Hill, prepare vegan meals in their kitchen to help feed the homeless. Lilly let some of her “Intercultural Communication” students tag along with her on a trip to a camp in East St. Louis, Illinois, this spring as part of a class project on microcultures. (Photo courtesy of Amanda Lilly)

When a group in Ahrndt’s “Intercultural Communication” course wanted to conduct interviews with homeless people for a project on microcultures, Lilly let them tag along on one of her regular trips to deliver food to a camp in East St. Louis, Illinois.

“I had run a marathon and have always been into fitness, but it’s really hard to spend that much time exercising when you’re trying to go to grad school,” Lilly said. “So, I did powerlifting, and it’s a little bit less time-consuming. Maybe.”

On Saturday, Lilly presented one of the papers she authored with Reinhart, “Using Focused Focus Groups to Uncover Barriers and Strategies for African Americans and Organ Donation,” at the International Communication Association Conference in Washington, D.C., the annual gathering of an academic consortium that counts more than 4,500 members in 80 countries.

“That should be a great opportunity for her,” Reinhart said. “It’s the largest conference in our field, and I want her to get that experience. She’s fantastic.”

The next chapter
As is her wont, Lilly already has a head start in her PhD program. She took a trip to Purdue in late April to look for apartments and meet with her advisor and, while she was there, she went ahead and got the reading list for next semester so she could knock it all out this summer.

She already knows what she wants to study for her dissertation and has a 30-page proposal to that effect. She’s interested in how predictive personality is in a person’s likelihood of sending “unsolicited explicit images” on dating sites.

Lilly came upon this topic after Hill created a dating profile and, within a day, received eight such images.

“I was like, ‘This is a huge problem. How come no one is making this a big deal?’” Lilly said. “I tried to find other articles about that topic, and there were like two. So this is a wide-open research area that I’m really interested in. I want to do social change and make a difference, and I think it’s something that needs to be taken more seriously than it is.”

Once she earns her PhD, Lilly wants to come back and teach at UMSL. She has been impressed by the quality of the communication program and its instructors.

“I love this university,” said Lilly, who benefited from the Grad Tuition Award during her time at UMSL and served as a student marshal at commencement May 18. “It’s an amazing, inclusive place that takes time to really teach its students and engage with its students.”

Professors such as Ahrndt and Reinhart also helped Lilly persevere through a period in her life in which she and her mother both took on responsibilities caring for her ailing father.

In her bag, Lilly regularly carries a laminated card from Moore’s funeral that bears his likeness. He’ll be with her on the next step of her journey.

“It’s very bittersweet,” Lilly said. “It was such a blessing to get to have him see me get accepted to Purdue and know that I’m going to continue on. It’s been kind of a rough road, but I’m really excited for the next chapter.”