CJ Jones finds community, clarity on the way to a pair of degrees at UMSL 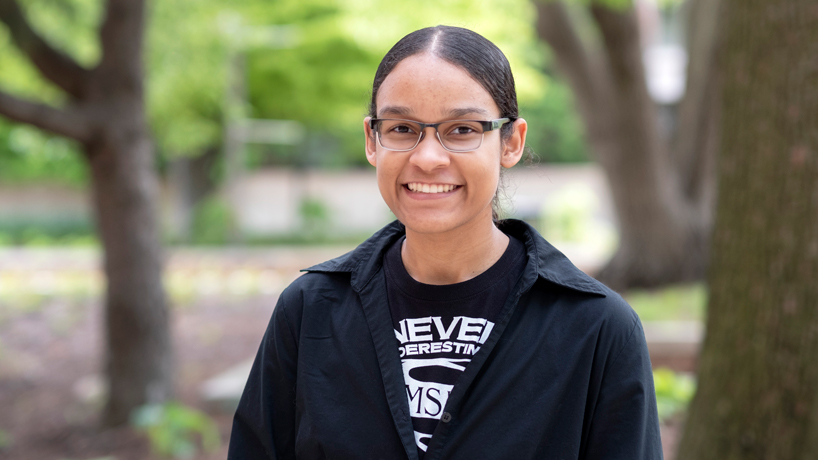 Whether through the Pierre Laclede Honors College during their undergraduate career or through the School of Social Work during pursuit of an MSW, CJ Jones was always able to find a sense of community at UMSL. (Photo by August Jennewein)

As CJ Jones neared the completion of their BA in psychology at the University of Missouri–St. Louis two years ago, they started to wonder what would come next.

Jones was set on entering graduate school but wasn’t sure where to go or what to study.

“It was one of the first – if not the only – class where I had an African American woman at the head of the classroom,” Jones said. “She just has a great way of connecting with students and teaching the material that is just really invigorating. I learned a lot about the history of social work in that class, and it made me really proud of what our profession does, with the commitment to justice and equity.”

Jones graduated with an MSW this spring. They made a habit out of following their instincts and taking advantage of opportunities on the way to earning two degrees at UMSL.

“CJ is incredibly bright, and then you wrap that up in a gentle, kind, soft-spoken personality,” Johnson said. “Students really love that CJ was giving of their time as a graduate teaching assistant. CJ has a built-in level of patience where it’s just obvious when you meet CJ that you are talking with someone who truly cares and has the desire to help. CJ is open-minded, incredibly efficient and has an easygoing personality that lends itself to being flexible.”

Johnson worked closely with Jones and fellow graduate student Amy Bellm on a project examining the relative shortcomings of historical theories on gender identity, which Jones presented at the Graduate Research Fair in April.

During their two years in the MSW program, Jones also reviewed manuscripts for Associate Professor Joe Pickard and other professors in the School of Social Work. They also authored an article with Assistant Teaching Professor Courtney McDermott, Clinical Professor Patricia Rosenthal and Saint Louis University Associate Professor of Psychology Kira Banks that assessed the outcomes of an effort to achieve racial equity in social work agencies in the St. Louis region.

“I would love to continue some way in academia, whether it’s adjunct teaching or doing research,” said Jones, who served as a student marshal during commencement May 18. “Social work is kind of nice in that you can have varied interests and still incorporate them all.”

They plan to return to school for a PhD at some point, but before that, Jones is putting in two years of practice to become a Licensed Clinical Social Worker. That’s another thing about their foray into the field: Jones found they like the clinical work just about as much as the research.

Jones completed a practicum with Bridgeway Behavioral Health’s domestic violence and sexual assault program – where they now work on an as-needed basis – and could also see themselves ending up in a counseling setting.

“When I came in, I had this feeling that I had to settle down on one choice. If I wasn’t making that choice, I wasn’t being a good professional,” Jones said. “Something that I’m taking away is that it’s OK to have diverse interests and follow through on them.”

It’s a lesson Jones learned well during their tenure at UMSL. Both parts of it.

“It’s a mid-sized university, but there’s still that small-school atmosphere that I was able to find on campus,” Jones said. “Whether it was as part of the Honors College or the School of Social Work, I always felt like I had my little community.”

Something Jones hopes future students will take away from their experience is that “there is no one right path. Don’t be afraid to explore and take your time to find out what’s right for you.”