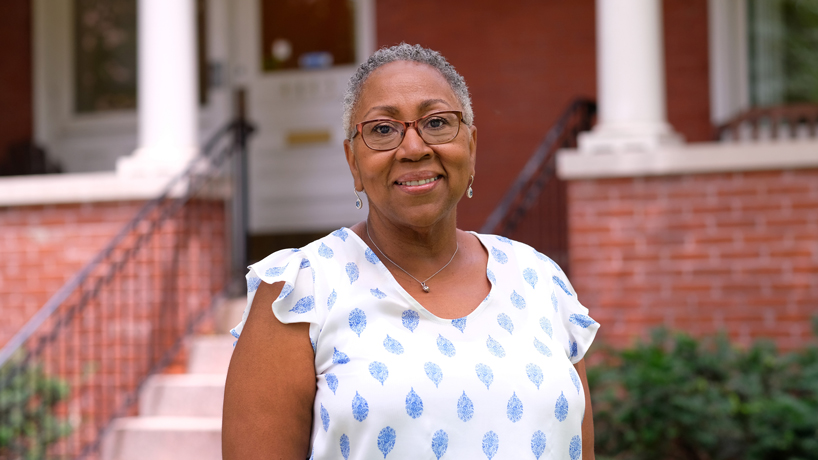 In her role as a forensic interviewer, Beverly Tucker provides a warm, welcoming outlet for children who have allegedly been victims of maltreatment. Tucker has worked with the UMSL-affiliated Children’s Advocacy Services of Greater St. Louis for the past 20 years. (Photo by August Jennewein)

The children who meet with Beverly Tucker do so in fragile states.

Tucker, a forensic interviewer with the University of Missouri–St. Louis affiliate Children’s Advocacy Services of Greater St. Louis, speaks with kids who have allegedly been victims of some form of maltreatment. That can mean anything from physical or sexual abuse to severe neglect to subjects who have witnessed murders or other forms of extreme violence.

It’s her job to communicate with them and try to figure out what happened. More importantly, though, it’s her job to help give them a voice.

“What I’m trying to create for them here is a sense of safety and support,” Tucker said. “We ask questions that really give the kids the impression that what they have to say – and who they are – is important and of great value. That kind of respect in and of itself empowers a lot of kids to speak. It may be about their experience, it may not. Either way, we respect and value them enough to listen.”

Tucker is one of three forensic interviewers who all rotate between the three Children’s Advocacy Center locations: the Kathy J. Weinman center on UMSL’s South Campus and ones in Kirkwood and the Central West End. At their peak capacity, interviewers at the center have conducted interviews with around 700 children in a year, most of whom are referred by law enforcement and child protective services.

Friday marked Tucker’s 20th anniversary with the service, performing a job that gives her the sense of helping ease the trauma for the children she sees.

“There’s a lot of power in being heard, especially for kids,” Tucker said.

A criminal justice graduate of Southeast Missouri State and Lindenwood universities, Tucker spent her early career with the state Division of Youth Services and the St. Charles County Children’s Division. St. Charles County was making plans to build its own children’s advocacy center and asked Tucker to go through forensic interviewer training.

Tucker stepped up and, within the month, she was one of two Americans attending training sessions at the University of Dundee in Scotland. When she got back, St. Charles County let her practice and learn for a day a week at UMSL’s on-campus center.

When a job opened up at UMSL, Tucker was a compelling candidate.

“No two days are ever the same. No two kids are ever the same,” Tucker said. “I get to bring who I am to the process, merge it with the science of interviewing and meet kids where they are. It never gets old, never gets stale. Then there’s the energy that you get from working with other people in the field. We can’t do this work without law enforcement, the Children’s Division, family court, the prosecutor’s office, circuit attorney’s office. We really fuel each other’s energy and drive.”

The CAC strives to be a full-service agency, complete with counseling and therapy services. The front-desk staff is trained to be welcoming, Tucker says, and the furnishings are designed to broadcast a warm atmosphere.

The overall impression they’re going for is a figurative hug, according to Tucker. When she first got her start in the field, places like this didn’t exist.

“It was very much piecemeal,” Tucker said. “Kids would have to interact with multiple organizations, multiple people within organizations. They were inundated by helpers, but because the helpers weren’t working together, I don’t think any of us were as effective as we are by working together. I fear we were hurting some kids and families. Who wants eight people showing up at their house, or to be asked to travel around their community to a number of places to address a trauma? That’s traumatizing in itself. Our center leads the effort to bring all the players together in hopes of minimizing the demands on our families.”

The best cases, Tucker said, are the misidentifications. They’re the times when a referral comes in and, through the course of the interview, it’s determined that the child most likely was not subject to the reported maltreatment. A good forensic interview seeks to learn the facts that either support or refute allegations.

Short of that, though, Tucker cherishes the opportunity to be part of a process seeking to provide a safe haven for kids who have been through some pretty horrific things.

“It’s when you can see kids feel respected,” Tucker said. “They leave our doors with a smile. Sometimes they’re reluctant to leave. We want all kids to know that count and that they matter. That’s a good day to me whether they disclose an abuse experience or not. I don’t have control over whether kids have been maltreated, whether they disclose or what may happen throughout the investigative process. What I do have control over is communicating respect to kids. That is something I can control each and every time.”