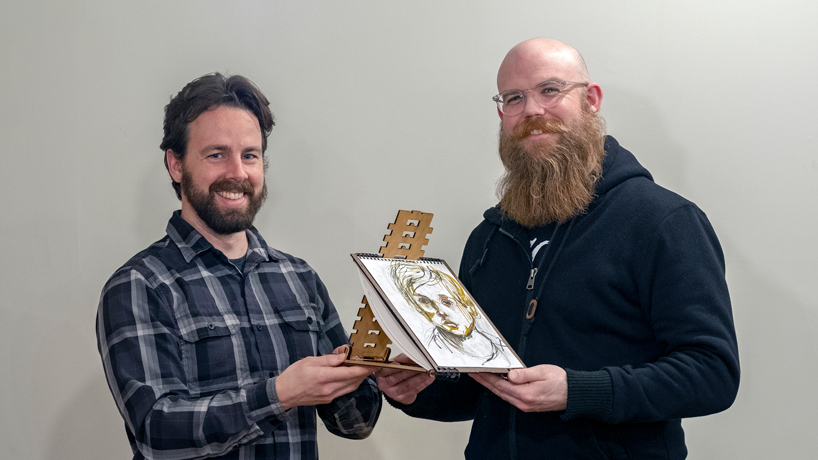 UMSL graduate Jacob Lewis (at right) shows off the Rasa Easel he created with his childhood friend Joshua Falconer (at left). The portable, adjustable, refillable easel is available for preorder online. Lewis earned a BFA in studio art with an emphasis in art education and now teaches at McKinley Classical Leadership Academy Middle School. (Photo by August Jennewein)

The idea came to Jacob Lewis during a quiet moment as planning a lesson for his art students at McKinley Classical Leadership Academy Middle School.

The University of Missouri–St. Louis graduate – who earned his degree in studio art with an emphasis in art education in 2017 – hoped to teach them portraiture and he started envisioning the sixth-, seventh- and eighth-graders hunched over their desks sketching a subject in the building in south St. Louis.

Lewis soon started to see a problem. Artists typically use easels to create portraits, propping their paper up so their eye can move seamlessly from subject to picture and back again. Lying the paper flat can lead to a foreshortening effect.

“Your brain is going to compensate for that change, so when you hold your picture up, it stretches out the face to be like a conehead,” Lewis explained recently while sitting in basement conference room at Nebula, a coworking space near Cherokee Street. “I was drawing and I realized, ‘Oh, crap, like, my kids are going to all have coneheads when they draw these portraits.”

Even if he had 20-plus easels, Lewis wasn’t going to be able to fit them all in his classroom, so he started imagining some solutions, ripping up his sketchbook to try to get it to stand on its own.

Somewhere in the process of trial and error, Lewis realized the thing he was making might be useful for more than just his students.

He texted his friend Joshua Falconer and started sharing the concept that would become the Rasa Easel, a portable, adjustable, refillable hardboard easel now available for pre-order online in either 6 x 8- or 8 x 10-inch sizes for $39 and $55, respectively.

At the time, Lewis and Falconer had been looking for a creative project they could work on together.

The two had known each other since middle school in Mesquite, Texas, where they met on the bus on the way to school not long after Lewis moved there from Dexter in southeast Missouri. They became fast friends, so much so that they stayed in touch even when Falconer and his family moved to California about six months later.

When they were adults and living in separate cities, they’d often meet up in the summers to work on short-term art projects together.

They once collaborated on work that was displayed in a gallery in Cumberland, Maryland, just outside Washington, where Falconer was studying for his PhD in Semitic and Egyptian Languages and Literatures at The Catholic University of America.

Falconer in the years since had talked about wanting to try to come up with a product idea they could create and license. He was excited when he heard Lewis’ idea.

“I think this might be it, man,” Falconer told him.

Shortly after Falconer moved to St. Louis last year, they got to work on trying to make the vision a reality.

“Jacob had exactly the basic idea that we ended up sticking with where the cover had the stand built into it,” Falconer said. “I just worked on refining it and basically getting it wrong over and over and over until it started to work. Then it started working really well.”

Eventually, they connected with Don Fedorko, proprietor of ImprovEyes, who opened up his studio and gave them access to laser cutters as they tested early prototypes. Falconer later migrated to MADE makerspace, using their laser cutters to test more than 200 other revisions as they worked to perfect the design.

“We could make small museum of prototypes,” Lewis said.

They launched a Kickstarter campaign and raised nearly $10,000 last year to support the project. They also assembled a network of artists who have endorsed the invention in YouTube videos and on other social media.

These entrepreneurial tricks had to be learned along the way. Neither of them had any business experience.

Lewis had held a variety of jobs while struggling to make it as a musician after moving back to Missouri and settling in St. Louis in 2010. He worked as a direct support professional for adults with developmental disabilities with St. Louis Arc. He worked in the photo department at a Walgreens. He even spent a year as a corrections officer, working in maximum security, at the City Justice Center.

Ultimately, he found his way back to school with a goal of teaching.

Art seemed like the only choice. It had been one of his passions going back to his childhood in Dexter, where he found himself the subject of a local newspaper story because of his work and a well-known local artist invited him to join him for private lessons.

He starting out taking courses at St. Louis Community College–Meramec and later transferred to UMSL, where he bonded with faculty members like Karen Cummings, Louis Lankford, Michael Behle and, later, Jennifer Fisher, who took over for Cummings as the Art Education Coordinator.

“The teachers they were bringing in were people who were teaching or who had taught long enough and could give me a very honest assessment of how it actually is in the classroom,” Lewis said. “They were real, and I knew they weren’t going to B.S. me.”

That gave him confidence to continue down that path, and as he was wrapping up student teaching and getting ready to graduate, he landed a position with St. Louis Public School District, teaching visual arts at McKinley.

The job is not without its challenges, but he’s felt an enormous amount of love and support from his students over the past three years. This year, he was nominated for teacher of the year and also was given the responsibility and opportunity to redesign the school’s logo.

Lewis has stayed connected with UMSL and maintained relationships with his old instructors.

Last year, he brought some of his students to the Des Lee Fine Arts Festival at the Blanche M. Touhill Performing Arts Center, and he’ll be back again this year, volunteering as the festival’s visual arts coordinator.