Hannah Williams graduated from the College of Nursing with her BSN on Saturday and got married on the same day. Williams had worked as a medical assistant at a dermatology office before being inspired to go to school for her nursing degree. (Photos by August Jennewein)

On Saturday, a group of students listened as their names were called, stood and accepted the acknowledgements of their supporters and friends. Then, as one, they tossed their black mortarboards into the air.

But – despite this being a recognition of the completion of their degrees from the College of Nursing – they weren’t at the University of Missouri–St. Louis commencement ceremony.

They were at Hannah Williams’ wedding.

“I wanted to do something since we’ll be unable to walk at graduation,” she said. “I developed a great group of friends, lifelong friends. We would never have crossed paths if not for nursing school.”

Williams was thrilled when her then-boyfriend proposed over fall break last year. She’d planned to have her wedding the week after graduation, which she’d figured would be the second weekend of December. Then she received an email from the university with the date on the same day as her wedding.

“I was extremely disappointed because I really wanted to attend graduation,” she said. “But, of course, I also wanted to attend my wedding. There was actually a time where I was going to try to figure out how to attend both in person. But whenever I talked to my mom, she basically told me that I was insane.”

Finding out the college would have a virtual ceremony, which would allow Williams to participate in both, was a huge relief.

Then she received a phone call from College of Nursing Academic Advisor Harry Harris. He asked if she’d accept the honor of being marshal for the college.

“I was not expecting that call,” she said. “It took me by surprise. I’m glad to see that my hard work paid off.” 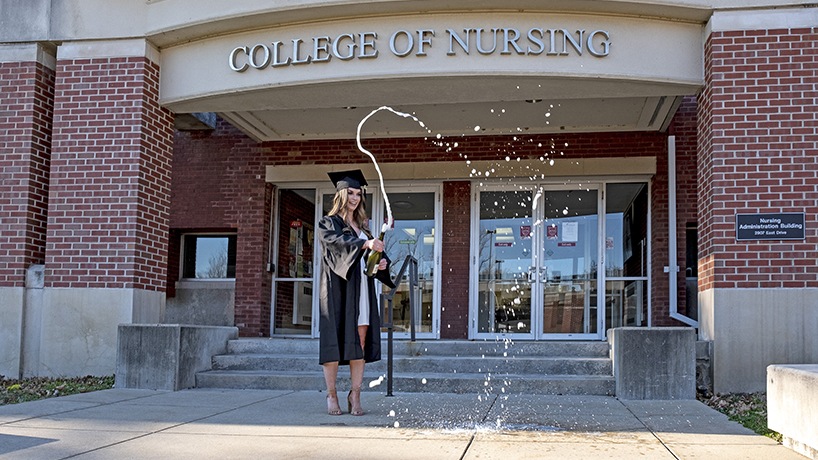 Hannah Williams celebrates two momentous life occasions in front of the College of Nursing at the University of Missouri–St. Louis.

Williams’ work didn’t start a handful of years ago as a traditional freshmen student. Instead, she earned her esthetician’s license out of high school. She started working at a spa, but the job and the salary weren’t a good fit for her, so Williams began looking for a different kind of work.

She spotted an opening at a dermatology office as a medical assistant. Despite not having any qualifications, she applied, got an interview and then the job.

The doctor at that particular office relied heavily on her medical assistants. Williams would chart for the doctor as procedures took place, call prescriptions in to pharmacies and communicate results with patients.

“I’ve always had an interest in helping people,” she said. “But I never knew how to go about it. Seeing all the different patients come in, and all the different problems and skin problems that they had definitely sparked my interest to go into health care in general. Then, I was talking to the doctor that I was working with, and she suggested that nursing is a great field, and that she thinks that that would be a great place to start my health care career.”

Williams dove into nursing prerequisites online at St. Louis Community College in 2016. She then utilized a bridge program with UMSL to transfer directly into the College of Nursing in 2018 for her clinical education.

“I loved pathophysiology,” she said. “I really enjoyed getting to learn and understand things at the basic level, and then going from there and figuring out why things happen. Not just, ‘Oh, the patient has this, so treat it.’

“I love getting to know, ‘So if a patient has heart failure, what caused her heart failure?’ Then you work your way backward. It makes it a lot easier to understand why a patient is sick, or why they developed a chronic condition or comorbidity.”

For the last year and a half, Williams has worked as a student nurse technician in the Neuro ICU at Barnes Jewish Hospital. Getting to see what health care is like outside of the controlled environment in a doctor’s office has been invaluable.

“Working in a hospital, you never know what you’re going to see or get or what your patients are going to be like, so it really helped me,” she said. “It also allowed me to do a lot more hands-on processes that I wouldn’t have gotten if I wasn’t working in the hospital. I wouldn’t have the same patient interaction. I don’t know that I would feel as comfortable going into the field.”

That experience will be helpful as Williams starts working in Cardinal Glennon’s pediatric intensive care unit after graduation.

Pediatrics had been one of her favorite subjects in school and is the field she hopes to stay in long term, eventually as a pediatric nurse practitioner.

“It can definitely be a sad place, don’t get me wrong,” Williams said. “But there are times that we have very sick patients, and then we essentially nurse them back to health. It’s amazing to see them at their absolute worst, and then be able to leave the ICU and know that we made a difference in their lives.”