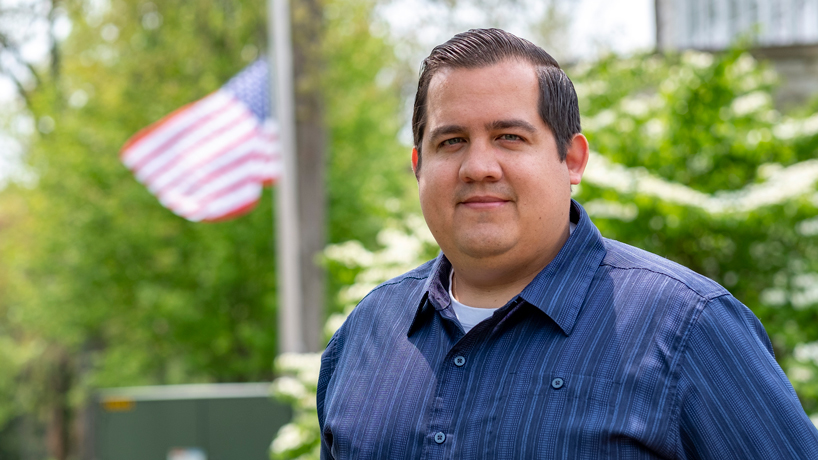 Ernesto Lopez is a doctoral student in the Department of Criminology and Criminal Justice and has worked as a research assistant for Curators’ Distinguished Professor Emeritus Richard Rosenfeld on a Council on Criminal Justice project examining crime rates in American cities amid the COVID-19 pandemic. (Photo by August Jennewein)

Ernesto Lopez will be ready this time if Friday’s release of the latest report from the National Commission on COVID-19 and Criminal Justice sets off a wave of media attention across the country.

Lopez, a doctoral student in the Department of Criminology and Criminal Justice at the University of Missouri–St. Louis, assisted Curators’ Distinguished Professor Emeritus Richard Rosenfeld in producing that and earlier reports examining monthly crime rates in major American cities going back to last summer.

There’s been widespread interest in the work with Rosenfeld a sought-after source to discuss the observed spike in violence that has occurred while the United States copes with the COVID-19 pandemic as well as other cultural touchstones such as the murder of George Floyd.

“There’s a saying, ‘If it bleeds, it leads,’ so I sort of anticipated that,” Lopez said. “But I was surprised to see my name pop up in The New York Times and other publications. I guess I was expecting it to get some publicity but not at the level it has and the sustained rate. It’s not common for things to stay in the news cycle repeatedly for such a sustained period of time.”

It’s clear the project, which began last spring in collaboration with crime researcher Thomas Abt, a senior fellow with the Council on Criminal Justice, and with support from Arnold Ventures, produced information that people wanted and that wasn’t available elsewhere.

“If you wanted to do a similar type of analysis to what we’re doing now, the most current data is going to be probably for the year 2016,” Lopez said. “Uniform Crime Report data is out for more recent years, but to get at least monthly level data from the Inter-University Consortium for Political and Social Research, the most recent data is in 2016, where you can get all cities by month.”

What Lopez and Rosenfeld did was to take advantage of publicly available data portals, maintained by individual cities and showing information from every reported crime incident. Lopez downloaded the data each month and put them in a standardized format.

“What I would do is write syntax for Stata– which is a statistical software we use – I’d just pull the certain crime types we wanted out and do the best we can to try to match standard definitions of what we’re looking for,” Lopez said. “You have to do that for each city. While there’s similarities, there’s too many differences to use the same language for every city, so you have to modify it for each city.”

The results of his work showed a clearer picture of recent crime trends and allowed for comparisons.

“Ernesto is just terrific,” Rosenfeld said. “He’s certainly one of the very best research assistants I’ve ever worked with. He’s a master at searching out and compiling data needed to answer important research questions.”

Rosenfeld appreciates Lopez for much more than his technical acumen.

“What I really value in him is his sense of curiosity,” Rosenfeld said. “You know, a lot of graduate students – for that matter, a lot of social scientists – don’t really have much curiosity, which is to say, they think they know what’s going on in the world, and they go out and search for data to support their pre-existing view. That’s how a lawyer would approach the study of a problem. The way a social scientist is supposed to approach the problem is to develop a hypothesis and then begin to search out alternative explanations.

“He’s also a terrific critic. He’s good at pointing out holes in the arguments I make or pointing out explanations I haven’t fully considered, and he, he does the same with the work of others.”

Rosenfeld first met Lopez while making an appearance as a guest speaker in one of Lopez’s classes. Lopez was challenging him on some of his statistics.

He’d already heard of Lopez’s skills as a quantitative researcher. The previous semester, Lopez had done some research work with Rosenfeld’s wife, Curators’ Distinguished Professor Janet Lauritsen, connecting data on social welfare indicators with data from the National Crime Victimization Survey to examine what role those indicators play for victimization.

Lopez aims to follow in the footsteps of both Rosenfeld and Lauritsen as he pursues a job in academia after graduation, though he would have found that hard to believe 16 years ago when he was struggling to finish high school in California.

“What I kind of like about going into academia is my path is a little different,” he said. “I barely graduated high school. I had an economics teacher tell me, ‘I’m giving you a D, I’m not failing you, so you can join the military and make something of yourself.’”

Lopez did enlist in the United States Army Reserves after earning his diploma and worked construction and factory jobs to support himself during his time in the military. He said he didn’t really get serious about education until he deployed to Iraq in 2008.

One of his best friends in his unit was an attorney from Los Angeles, who’d attended law school at UCLA. He was influential in getting Lopez to return school with a more focused mindset.

Lopez enrolled at Fullerton College after returning from his tour and decided to study social science, getting straight A’s his first semester back in the classroom.

After completing his associate degree, he transferred to California State University Fullerton, where he earned a bachelor’s degree in political science and public administration in 2014.

He remained at Cal State Fullerton to pursue a master’s degree in public administration with a focus on urban management, graduating in 2017.

Lopez contemplated pursuing a PhD in either political science or criminology, but he thought the job prospects might be better in criminology – an important consideration with a now 6-year-old daughter.

He explored the programs at least a half a dozen doctoral programs sprinkled around the West and Midwest – his wife did not want to relocate to the East Coast – and ultimately settled on UMSL’s program, which was No. 11 nationally in the latest U.S. News & World Report rankings.

“I chose UMSL specifically because one thing I’d heard from the criminal justice faculty at Cal State Fullerton was that UMSL had good mentorship, and the program structure would force me to take a lot of theory classes and take qualitative research methods,” Lopez said. “I knew I wasn’t interested in that, but I knew a substantial portion of the field was engaged in qualitative research, so the program structure at UMSL would make me a better-rounded scholar.”

That has been the case, and he’s found the mentorship he was hoping for from Lauritsen and Assistant Professor Kelsey Cundiff, a quantitative researcher whose interests include trends in crime, adolescent delinquency and spatial analyses of crime.

Lopez did not expect he’d have a chance to work with Rosenfeld, who retired from his full-time faculty position the year before Lopez enrolled at UMSL. He is grateful it has happened, not only for the lessons he’s learned but for the opportunities that have been presented to him because of their ongoing project.

The Council on Criminal Justice just hired him as a researcher.

Lopez is entering his fourth year in the PhD program, which means he has finished his coursework, has been working on his qualifying papers and is starting to think about his dissertation topic. He’s conflicted on whether he should choose a project that is policing centered or punishment centered.

“The dissertation is supposed to be a big impact on the field,” he said. “You’re not just theory testing. The idea I’m working with for punishment could be more impactful. I think it’s more interesting, more original, than if I were to pursue the policing idea.”

He has a little time to make up his mind.

Of course, there’s no way of knowing exactly where he’ll end up after finishing his degree.

“He has a really bright future,” Rosenfeld said, “however he wants to approach it.”