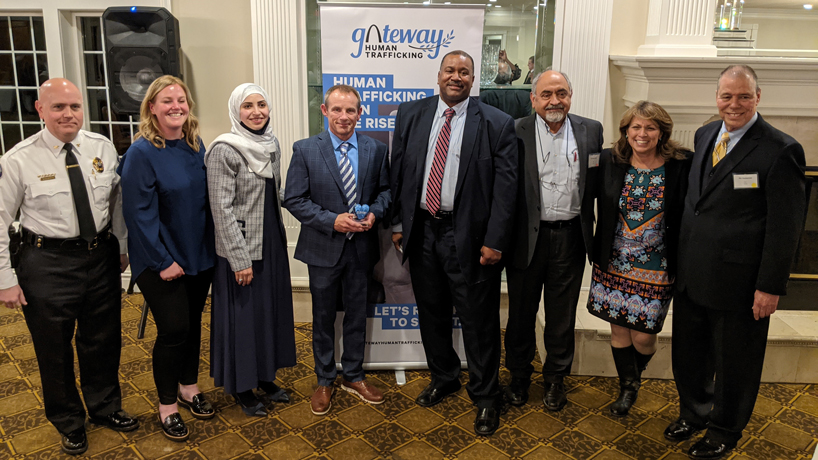 The location of Missouri near the center of the country and the multiple north-south and east-west highways passing through its borders sadly make the state fertile ground for human trafficking, with children often its victims.

Missouri has been ranked among the top 10 states for number of defendants prosecuted in human-trafficking cases in recent years, and many of those cases have originated in the St. Louis region.

That unfortunately has kept Anthony Harper very busy over the past eight years since he joined the staff at Children’s Advocacy Services of Greater St. Louis.

Harper serves as a forensic interviewer at CASGSL, an affiliate of the University of Missouri–St. Louis that assists children of all ages who have experienced any kind of trauma by providing them with services, including counseling and forensic interviews. At last count, he had conducted 1,467 such interviews since 2013.

“We’ll interview kids anywhere from 3 to 17, and then we’ll also interview vulnerable adults on cases as well,” Harper said. “St. Louis is one of the larger areas that unfortunately has experienced a lot of sex trafficking of minors, just given the kind of hub that we are.”

Talking about the experience can be difficult for children, but it can also be an important part of healing and seeking justice.

“My hope is that I make a big difference in every kid that comes in and has the opportunity to talk to someone who is not putting pressure on them,” Harper said. “We try to make it as comfortable as possible to talk about what is most likely the most traumatic thing that’s ever happened to them.”

The organization, which aims to increase awareness of the problem of human trafficking and minimize victimization of vulnerable people by empowering communities through education about how to identify and report it, presented Harper with a Blue Heart Award at its annual dinner last Wednesday at Whitmoor Country Club in Weldon Spring, Missouri.

The award is given annually to those organizations and/or individuals that demonstrate exceptional courage and devotion to support Gateway Human Trafficking’s mission in combating human trafficking and exploitation.

“It is an honor to recognize the best of the best within our community who have big hearts to stand for victims and survivors of human trafficking,” said Shima Rostami, Gateway Human Trafficking’s executive director and an adjunct faculty member in UMSL’s Department of Sociology.

Harper moved to his position at CASGSL after nearly 20 years working for the Children’s Division of the Missouri Department of Social Services. There, he spent time as a child abuse and neglect investigator, investigation supervisor, circuit manager and program manager for the St. Louis City Child Abuse and Neglect Unit. He also served on the St. Louis City Child Fatality Review Panel, Missouri State Child Fatality Review Panel and numerous committees and task force regarding child abuse and neglect.

He credits a friend for helping him find his calling into social work.

Harper had enlisted in the U.S. Marine Corps after graduating from Brentwood High School, and he wasn’t certain which direction he should move in next after his service ended. But he visited his friend, who at the time was working at a residential treatment center and got interested in exploring similar avenues to make an impact.

He enrolled in UMSL’s School of Social Work and went on to earn his bachelor’s degree in 1994 before joining the Children’s Division. He was still working for the state agency when he earned his MSW from the University of Missouri–Columbia in 2005.

Harper’s current job can be grueling psychologically. He encounters tragedy daily when interviewing children about the circumstances they’ve been forced to endure.

“It can be very stressful at times,” he said. “I focus a lot on outside activities that kind of keep myself grounded, just try to do a lot of positive things outside of work.”

Among them is serving as an assistant coach, working with running backs and defensive backs, for the Brentwood High School football team.

It also that helps that Harper feels great support from his colleagues in the forensic unit at CASGSL. He stressed that his recognition is a reflection on all of the them.

“We have a team approach as we work to make sure these kids are safe and taken care of,” Harper said. “We lean on each other a lot. There’s a lot of teamwork. And we know how to work in an environment that’s filled with trauma and not let it overwhelm us.”