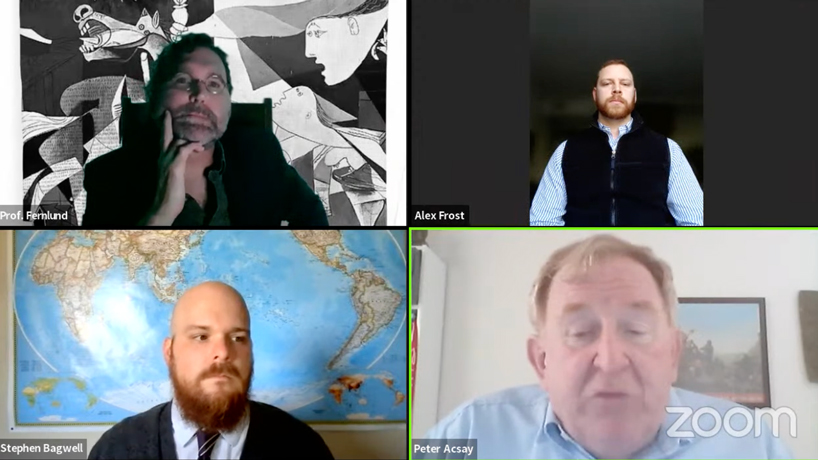 In an effort to provide some background to the events unfolding in Ukraine since Russia’s invasion last week, the Department of History and the Department of Political Science at the University of Missouri–St. Louis arranged a webinar Monday titled “The Ukraine Crisis and the Future of War.”

“What is happening now in the last week is really the culmination of almost 20 years of effort by Putin to replace independent and strong Ukraine with one that is committed to anti-NATO and anti-EU membership,” Acsay said. “This is something Putin announced many years ago – that the three enemies to Russia are the EU, NATO and the United States. So, this is part of a larger effort, and it is not just something done on the will of the moment. It may or may not aim at reincorporation of Ukraine to Russia, but Putin has made statements like that recently.”

As Acsay noted, Ukraine has only existed as an independent state since 1991, other than a brief period during World War I that coincided with the Russian Revolution. For much of its history, it has existed under Russian influence or outright control, including as one of the Soviet Republics.

In the years since 1991, Ukraine’s independence has remained fragile. In 2014, a revolution led to the ouster of then-President Viktor Yanukovych while he was pursuing closer ties with Russia. Later that same year, Russia annexed the peninsula of Crimea in southern Ukraine. There has been fighting between Russian separatists and the Ukrainian forces in the Donbass region in eastern Ukraine since 2014. In the leadup to Russia’s invasion, President Vladimir Putin backed separatists’ claims to the entirety of the Donbass region and recognized the so-called Luhansk and Donetsk People’s Republics as independent.

Fernlund noted the date when Putin launched the invasion – Feb. 24, 2022 – as one that will remain infamous in the annals of history. But he wanted to discuss another date: August 27, 1928.

That was the date the United States and France negotiated the Kellogg-Briand Pact, whose signatories agreed to not use war to resolve “disputes or conflicts of whatever nature or of whatever origin they may be, which may arise among them.”

Germany and Japan all violated the pact at the start of World War II, but Fernlund said the agreement still marked a turning point in American and European history. It set the parameters that the Allies returned to after the war ended and underlay the Charter of the United Nations in 1945.

“The idea of conquering new countries, new lands, peoples – that idea was now was now passe,” Fernlund said. “So, 1928 is a real divide.”

Except, that is, for the Soviet Union, which refused to withdraw its forces from Eastern Europe after World War II, choosing instead to set up a sphere of influence that led to the ensuing Cold War with the West that lasted until 1991.

“Now the folks in Eastern Europe weren’t happy that they were occupied by Russia,” Fernlund said. “Russia had to send their troops into Germany in 1949, Hungary in 1956 and Czechoslovakia in 1968 to stifle and oppressively put down the peoples of Eastern Europe. So, Russia actually has a long history of doing just exactly what we’re seeing Russia do right now.”

Beyond the historical backdrop, Bagwell offered his perspective on the motivations that might have led Putin to invade and to do so now – as well as some things that, in his estimation, did not.

For instance, Bagwell does not believe that Putin’s decision to invade is a reaction to NATO expansion, because there’s been no momentum toward NATO expansion in at least the past decade. Likewise, he dismissed Putin’s claim of an ongoing genocide against Russian people, because no such genocide is taking place.

Instead, Bagwell saw a potential motivation in Russia’s domestic politics.

“Opposition to Putin is at an all-time high in Russia,” Bagwell said. “There were 168 protests that were met with intervention or violent force in Russia in early 2021. That wave was in part caused by the arrest and detention of opposition leader Alexei Navalny, and there have been continued protests about that and about ongoing corruption and lack of economic performance in the Russian Federation.

“On top of the internal motivation, there’s also the external motivation. The spread of democracy in the region – a popularly elected charismatic leader in Ukraine. That certainly challenges Russia’s and Putin’s stance in particular that he alone is qualified to lead the Russian Federation. In the face of ongoing domestic protest and dissent, the spread of democracy is a challenge, and you don’t want that if you’re an autocrat.”

The conversation continued as they took questions during the hour, and they addressed possible ways this conflict might end. The full discussion can be viewed by clicking below: