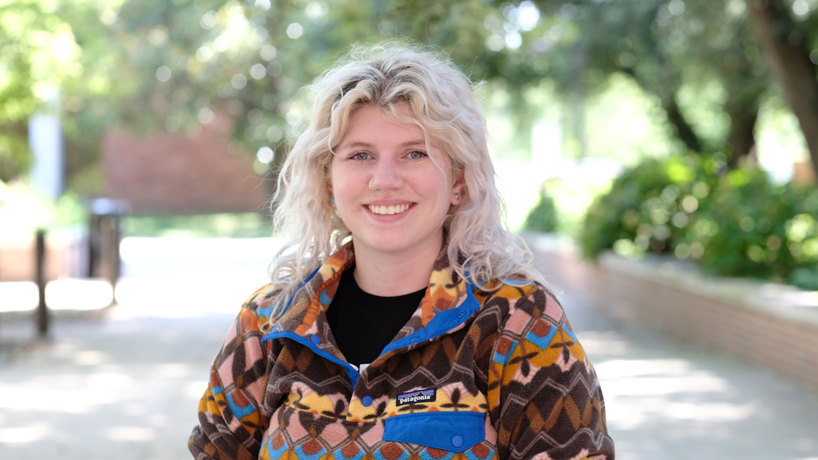 Doctoral student Sydney Young was among 82 students nationally named to the ALL IN Student Voting Honor Roll. (Photo by August Jennewein)

Sydney Young has always known the importance of civic engagement.

When she turned 18, she immediately made sure she was registered to vote, and there were even times as a college freshman or sophomore at Missouri State University when she emailed or called the office of one of her legislators about issues up for debate that mattered to her.

But it wasn’t until she enrolled at the University of Missouri–St. Louis to pursue a second bachelor’s degree in political science that Young started spending so much time working to get others involved in the political process.

“As a political science student, I think everyone should vote,” Young said. “Voting is a part of our democracy. But I also come from a psych background and do a lot of advocacy work, so I know that women and minorities and LGBTQ communities – different marginalized groups – are impacted by laws making voting difficult, like requiring a license ID when not everyone has the license or needing to wait in line for six hours to vote. The voices that need to be voting the most are not able to get their voice out.”

Young knows it’s vital to make sure people understand who they’re voting for and why and ensuring they are registered and have the ability to get to the polls.

Even when she was still living and working in Springfield, Missouri, and taking classes online, Young joined the Political Science Academy and started work on voter engagement initiatives in her role as the organization’s social media chair. Her involvement only grew after she completed her bachelor’s degree and moved to St. Louis to begin pursuing her PhD in political science. She joined Associated Students of the University of Missouri and became a member of UMSL’s Civic Engagement Coalition.

“She is one of the most enthusiastic people whom I have ever met,” said Patricia Zahn, UMSL’s director of community outreach and engagement. “She is passionate about our voter engagement efforts and works hard to share information through the social media platforms to encourage people to register and to vote.”

Young’s work helped the Political Science Academy get recognized for Excellence in Virtual Programming and as Student Organization of the Year by the Office of Student Involvement in 2021. She also helped PSA secure a grant from the United Way to help increase awareness and enrollment in Medicaid expansion for UMSL students and members of the surrounding communities.

“Sydney is an outstanding student and citizen,” Assistant Professor Anita Manion said. “She is truly passionate about civic engagement and social justice and is a wonderful ambassador for UMSL.”

Last spring, Young received the Excellence in Civic Engagement Award on campus and was one of 82 students nationally named to ALL IN Student Voting Honor Roll after being nominated by Zahn and Manion.

“When I got the email that they nominated me, I got a little tear in my eye, knowing they have been seeing the work I’m doing and not only nominating me for school awards but going out of their way to nominate me for national awards,” Young said. “It was really validating.”

She has felt that way often since joining the political science department, even when she was living four hours away.

Young, who grew in Clarksville, Missouri, a small town east of Bowling Green, Missouri, along the Mississippi River, had gone to Missouri State to study psychology with the idea of one day working as a therapist in the prison system. She wanted to try to understand the issues that led the worst offenders into the system so that she might somehow help prevent them from committing crimes.

“That was the whole plan,” Young said. “I’d been taking all these classes on policing and criminal justice. At this time, I was working as a juvenile officer, and I was like, ‘This is not what I want to do. I don’t want to see people in prison. I can do more work on advocacy instead of therapy.’”

After taking a year and a half off from school, Young made the decision to return to college in the summer of 2019 to pursue a second bachelor’s degree in political science. Not ready to give up her steady job as a deputy juvenile officer in Greene County, she started looking for places where she could complete her degree online and found UMSL.

“I think she’s probably one of our first graduates of our online undergraduate degree programs,” said Professor David Kimball, chair of the Department of Political Science. “We just started them a few years ago. With those programs, we can reach a wider range of students who don’t live in the immediate St. Louis metro area, and it’s been really great for us to have Sydney as part of our department.”

Even though she was taking classes remotely, she wanted to be involved, and she credited Manion for helping her make inroads.

“I knew I still wanted to be a part of the UMSL community,” Young said. “I wanted to fully be a Triton, so Dr. Manion, as the faculty advisor for the Political Science Academy, was able to get me a leadership role as the social media chair.”

Manion also served as Young’s undergraduate advisor, helping her navigate the path toward her degree.

Over her time as an undergraduate, she took an interest in some of the research that faculty members such as Manion and Kimball were doing. In particular, she became curious about the disconnect in the popularity of issues such as medical marijuana and increasing the minimum wage among voters with the success of candidates who oppose them.

She decided she wanted to look more deeply into those dynamics and applied for the PhD program.

Since joining the program, she’s researched and written papers on topics such as capital punishment while also working as a teaching assistant. More recently, she has started to examine the school-to-prison pipeline in a new role as a community engagement restorative justice fellow at the ACLU.

Young began her fellowship last month after first working an internship as a complaint intake counselor earlier this year. In October, she’ll move to the town of Hayti in Missouri’s Bootheel to continue her role, hosting workshops and going door-to-door to share information while getting to know the community.

That means she’ll once again be an online student as she works to complete her elective coursework before beginning her dissertation. But she expects to remain engaged with the Department of Political Science and civic engagement efforts at UMSL.

“I’m able to manage it all because I have amazing bosses and faculty to work with,” Young said. “The ACLU also knows I’m in school, so they let me work from home a couple days a week to do homework or if I have class. Dr. Kimball and everyone at UMSL have been super flexible and worked with me when I said, ‘I’m doing this. It’s something I’m passionate about. What can we do so I can do it all?’”