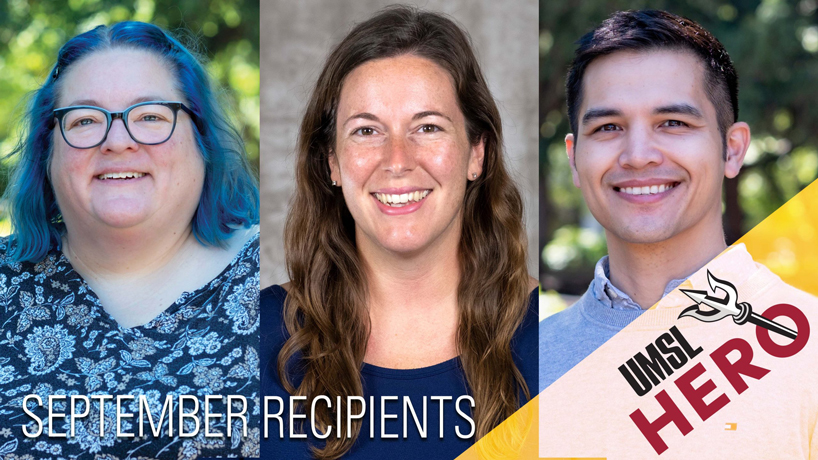 After graduating from Saint Louis University with a master’s degree in public health, Jupka began her career in research at her alma mater as a research coordinator managing the implementation of public health and health communication research.

Later, she continued her career in research and public health at a nonprofit and a public health department before landing a research associate position in the research office of College of Nursing. Now a senior research associate who’s been in the field for 20 years, Jupka enjoys her role supporting faculty and student research, performing grant writing, doing data collection and analysis and assisting with the internal review board.

Jupka’s foray into the field of research happened naturally.

“When I got my master’s degree, I started working in a research coordinator position and I really enjoyed it,” Jupka said. “And then it kind of moved on from there. I liked research. Research in the academic field is interesting because you aren’t hired on for one job and you do that job for 20 years. You would do one project, and then there would be a new project. So there’s variety and other things you can do.”

Jupka feels working in research at a university is a position that suits her well, and seeking a role at UMSL three years ago was intentional.

“After being out of the university setting for a while, I decided to go back because I realized that academia was a fit for me,” she said. “And I’ve always understood UMSL as a very community-based university that serves a lot of students from various backgrounds. And UMSL has a lot of research going on throughout the university.”

In reference to service, Jupka is very comfortable in a supportive role.

“My job is not ‘what research I can do to further myself,’ but it’s ‘how can I support faculty and staff, and our students?’” she said. “It’s really given me an opportunity to work closely with both faculty and students. I like to be able to support people. A lot of my work is in the periphery. I’m helping to support things or reviewing things. I’m not necessarily front and center on a lot of stuff, which is fine with me.”

Being fulfilled in the background, Jupka has never had her sights set on receiving public recognition for her work. So receiving the UMSL Hero Award took her by surprise. But Roxanne Vandermause, dean the College of Nursing, nominated Jupka for the award and believes her work and work ethic deserve acknowledgement.

“Ms. Jupka is one of the two-person ‘small but mighty’ team that runs all research and scholarship activities at the college, and it also coordinates transdisciplinary and partner activities that relate to nursing research and scholarship,” Vandermause said.” “She is an initiator and creative force who supports the greater good and elevates the work of the college. Her support is needed for all our supported projects, and she keeps the momentum for grant-seeking even when the chips are down. Ms. Jupka is a consummate team player and an example for anyone dedicated to the academic mission.”

Vandermause’s sentiments are echoed by Kimberly Werner, associate dean of research in the College of Nursing, who also nominated Jupka.

“Keri Jupka is an exemplary and indispensable member of the College of Nursing staff and Research Office,” Werner said. “She not only meets but exceeds all expectations and takes on additional responsibilities to ensure the success of our students and college. Keri’s ongoing service to the College of Nursing and UMSL campus is extensive, serving as a member and administrative support for multiple committees and is actively engaged in professional opportunities, led by the Office of Diversity, Equity & Inclusion and Community Engagement.

“Keri consistently delivers superb quality of work with a positive attitude and regard for her colleagues and our students.”

Sarah Klekamp was approaching graduation at the University of Central Missouri when she began asking herself that common question: “What am I going to do next?”

One day she was talking with her sister who pointed out that she’d been enjoying her role as a student worker in the advising office. The light bulb went off, and Klekamp discovered her future career. She even went back to school after graduating to get her master’s degree in college student personnel administration.

Family and her then-fiancé brought her back to St. Louis, where she found a job at UMSL. She now serves as a senior academic advisor in UMSL’s College of Arts and Sciences, where she primarily supports students majoring in humanities and the fine arts.

“I really wanted to work in public higher education,” Klekamp said. “I felt I could be of the most assistance to students.”

Nearly 10 years after coming to UMSL, Klekamp is still enjoying her role helping students chart their academic path.  The fact that UMSL serves so many nontraditional students makes her work even more rewarding.

“Students are really making a lot of sacrifices that make their wins really big,” she said. “And it makes my assistance even more important. They have to have some type of support person they can count on to help get them through and keep them motivated.”

The impact Klekamp has had on her students has been highly valued and noted by Sylvia Harris, the assistant director of academic advising and student services, who nominated Klekamp for the award.

“Sarah provides valuable service and support to the UMSL campus community,” Harris said. “Her extensive knowledge of university programs and policies is much appreciated by me and others across campus. She excellently balances the needs of students and administrative work. Sarah is an absolute key player in our new student orientation and graduation initiatives and has mastered how to work in a high-stress environment yet maintains a calm and positive demeanor. She’s one of our students’ biggest cheerleaders cheering them to the finish line.”

“I always enjoy watching her hug students as they prepare to walk across the stage during commencement,” Harris said. “Sometimes she brings her kids up so that they can help too. Sarah is generous with her time and sincere with her guidance, and she demonstrates the utmost knowledge in her profession.”

Klekamp’s role requires a lot of interaction, something which takes intentional focus and engagement that can be wearisome.

“On a really busy day I could have 10 or 11 back-to-back appointments,” she said. “And those could be a mix of zoom, telephone and face-to-face. So, yeah, it can be draining for sure.”

Taking intentional measures to keep up with the demanding pace of her role and avoid burnout to be there for her students and herself is critical for Klekamp.

She stays organized with her schedule, which includes a lot of follow-up, and stays recharged by actively practicing self-care, something she discusses with her students. Klekamp also takes any possible break between appointments and uses her paid time off to recharge.

Maintaining her energy and focus for her role is important as Klekamp plans on having a long career at UMSL.

“Right now, the plan is just to continue what I’m doing,” she said. “I like the student interaction I get. So, for right now, there’s no set plans for something else.”

Looking at all the books on Wombles’ desk and realizing his love of literature and language, it’s not hard to picture him as an English professor, which was his original goal when getting his MFA in creative writing at UMSL. But his life went in a different direction that led him to become an integral part of the university’s digital team.

Wombles is the manager of web and digital communications in UMSL Marketing and Communications and manages over 200 UMSL websites and digital properties, helping with everything from advertising and content production to SEO and analytics.

While in graduate school, Wombles’ initial career path was diverted when he became a graduate assistant in the marketing and communications department. Later, he began working, again as a graduate assistant, in the College of Arts and Sciences doing digital work, event planning, social media and graphics for the school. He was then hired by the department as a media producer and webmaster.

His knack and talent for media production was noticed, and he was later transferred back to marketing and communications to manage all the university websites.

“I had been interested in web work ever since I was a kid, so it was a natural fit,” Wombles said.

Wombles, who is currently pursuing his MBA at UMSL, has been at the university for over 11 years as either a student or employee, and his job keeps his experience fresh.

“I do projects with students, staff, faculty and administration,” he said. “We work on everything from research, to community engagement, to enrollment. It’s just a huge variety of large, simultaneous projects and people to manage. It’s always changing.”

Though the variety of his work keeps Wombles engaged, the challenge of his job is figuring out how to communicate effectively on each web site for each audience.

“If we’re sending someone to a page about faculty research, the messaging is going to be different from Student Services or Financial Aid,” he said. “We’re also starting to consider what we want to translate into Spanish. We’re just trying to make sure everyone who wants to know what’s going on in the university can.”

Dedication to his work comes naturally to Wombles, but public recognition wasn’t on his radar.

“I was surprised,” he said. “I didn’t expect it, but it’s nice when others find value in your work.”

But Justin Roberts, associate vice chancellor for marketing and communications, believes Wombles deserves this public accolade for his unwavering commitment to be of service.

“Anyone who meets Tim can immediately see that he is dedicated to UMSL and is always ready to give a helping hand to support his colleagues,” Roberts said. “He not only goes above and beyond to support units across the campus in his role, but he was actively engaged on the UMSL Staff Council and recently joined the UMSL Alumni Association as a new board member.”

Wombles ultimately landed his role at UMSL through a graduate assistantship he started as a student. He chose UMSL for his creative writing master’s degree because he was impressed by the faculty and that some professors had been published and won awards.

Wombles is proud to work at a public university that holds its standards high and produces successful alumni. He hopes for a long future at the university.

“There’s no other higher education facility of this caliber in the area that’s public,” he said. “It’s rewarding to me to be in the public sector, doing what I can to provide access, communicate opportunities and show our organization in the best light.”