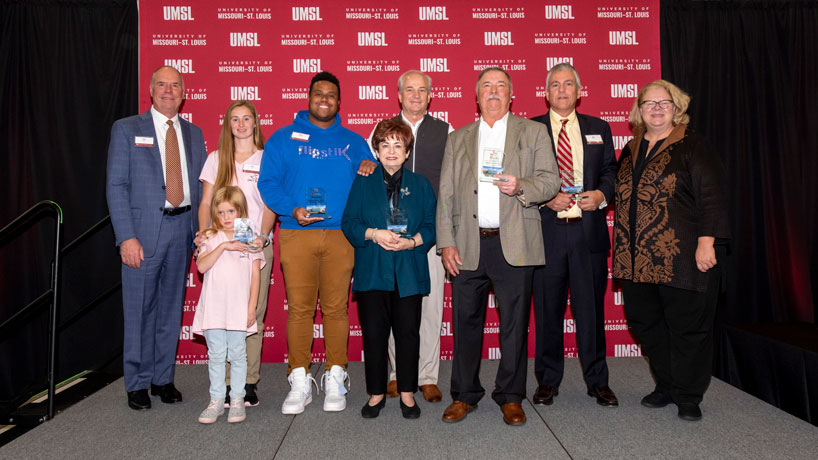 The University of Missouri–St. Louis honored five local entrepreneurs for their achievements and contributions to the region at the inaugural UMSL Accelerate Entrepreneur of the Year Awards.

The event was held on Oct. 20, three days before the unexpected death of retired Express Scripts Chairman and CEO George Paz, and he was presented with a lifetime achievement award.

“This award is designed to recognize someone with documented success in entrepreneurship, who also contributes significantly to the socioeconomic growth of the region and whose community centered mindset provides inspiration and an example for younger entrepreneurs,” said Dan Lauer, founding executive director of UMSL Accelerate. “There’s no one more deserving of this than George Paz.”

“These incredible individuals exemplify the spirit and mindset of entrepreneurship,” Lauer said. “They are leaders in our region who cultivate new ideas, drive change and create better outcomes.”

The awards were established by Peter Racen, an UMSL alumnus and business owner, with the aim of promoting entrepreneurship by highlighting impactful entrepreneurs, advocates of entrepreneurship, corporate visionaries and those practicing social responsibility in business.

“I wanted to inspire other business owners to get involved in the UMSL Accelerate ecosystem of entrepreneurship,” Racen said. “I’d also like to see how they can create other opportunities by taking some of their profits and resources and create jobs in this community.”

Paz was a 1982 graduate of the UMSL College of Business Administration who worked his way through school and entered the business world with a strong educational foundation. Climbing the corporate ranks, he rose to CEO and chairman of Express Scripts, where he established the company as the first and only Fortune 500 organization in the United States to locate its headquarters on a college campus in 2007 at UMSL. The positive impact of that move continues to resonate within both organizations today, years after his retirement in 2016.

“If I think back to when I started school, that I could have ever gotten to this position is beyond belief,” Paz said. “I think life is all about hard work, dedication, having your set of beliefs, values and integrity. I’m just glad I chose UMSL.”

Entrepreneur of the Year: Akeem Shannon

The Flipstik founder was a member of the first cohort of UMSL Accelerate’s first Diversity, Equity and Inclusion Accelerator in 2021. He launched his company on Kickstarter in 2018, not long after learning about a resuable adhesive developed by NASA while on a call with his uncle, a NASA engineer. Flipstik has seen incredible growth and has generated over $300,000 in sales, won first place at the 2019 CES Retail Pitch competition by TechStars and even competed on Shark Tank in 2020. Currently Flipstik is valued at $5 million with its product being sold at major retailers including Target, Claires and BestBuy.

“I never thought I would get an entrepreneur of the year award, but we’ve had a great year, and I honestly credit a lot of that to going through this program,” he said of the DEI Accelerator. “I think it’s only fitting that this award comes from UMSL.”

Clark is best known as the founder Build-A-Bear Workshop, and she served as its CEO until June 2013. She has over 45 years of experience in marketing, merchandising, store operations, digital technology, entertainment, strategic planning and real estate. Clark is also co-founder of the Clark-Fox Family Foundation, which supports the economic development of the St. Louis metropolitan region through program development and investments in K-12, higher education, public health, immigration, social and racial justice, community leadership, and entrepreneurship. Her current venture, the Delmar DivINe, is a multi-purpose facility that serves as a catalyst for the transformation of north St. Louis neighborhoods and its residents. It is focused on health, education and human service organizations.

Bowers is the founder of St. Louis Makes. He has over 20 years of new product development, product management and business development experience. Bowers held positions at The Toro Company, Colgate-Palmolive and Purina as well as an entrepreneurial role as the founder of The Grun Company. He has managed numerous product launches and created several new distribution and dealer networks for various product lines across diverse industry segments. Bowers earned a BA from the University of California, Los Angeles, and an MBA from the Graduate School of Business at Columbia University.

“I’m very thankful for the recognition’” Bowers said. “But what I really want to draw attention to, though, is the fact that UMSL has a strength in the students and in the people they pull into the entrepreneurship program.”

Lyons, who is from Salisbury, Illinois, is the owner of Celsi’s Dog Care, which offers day care and grooming services. She began her business in 2020 after winning a pitch competition for the EQ Student Accelerator. Lyons had been working independently as a dog walker and sitter while she was in school studying business management and marketing at UMSL and raising her 6-year old daughter, Cassidy. She utilized her client base and posts on Facebook to grow her business. Lyons will graduate this December with her BSBA. Celsi’s Dog Care, which she will continue to run full-time after graduation, now has over 100 clients.

“It’s definitely an honor to be recognized,” Lyons said. “To know that I won the pitch competition and being recognized outside of that.”