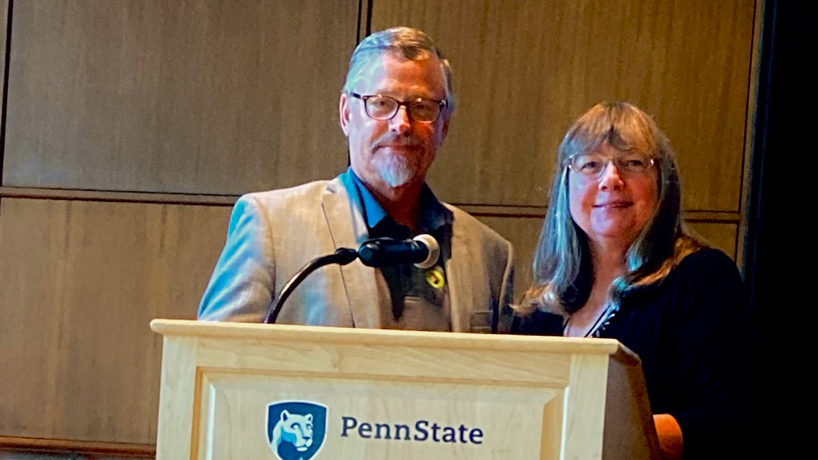 Douglas Swanson, who coordinates the Labor Studies Program at the University of Missouri–St. Louis and is a field specialist with MU Extension, joined Rural Opioid Technical Assistance Project Director Ann McCauley in delivering a presentation about the Recovery Friendly Workplaces initiative in Missouri at the inaugural Summit on Substance Use Disorder Stigma Reduction held in September at Penn State University. (Photo courtesy of Douglas Swanson)

The opioid crisis has exacted a heavy toll in the United States over the past decade with drug overdoses now ranking as the leading cause of accidental death in the country.

But even survivors of addiction pay a steep price because of the stigma that follows them, even in recovery.

“It’s difficult getting full-time meaningful employment for some people,” said Douglas Swanson, a field specialist with labor and workforce development with University of Missouri Extension who also serves as the coordinator of the Labor Studies Program at the University of Missouri–St. Louis. “I can’t help but think that by the time you get into recovery – you realize the damage you’ve done to everything in your life – and then to not be able to support your family, in some cases, not be able to support yourself – what’s to keep somebody from disappearing back into the cloud of addiction?”

Employers can play a significant role in reducing that stigma, looking beyond someone’s history with substance use and addiction to see the potential value they can bring to a workplace.

“You go to the grocery store, and you see that perfect apple or pear or green pepper, but in the U.S., we throw away tons of food because it’s perfectly edible but it doesn’t look perfect,” Swanson said. “That’s kind of what we’ve done with our workforce for too long. For example, we’re seeing construction projects that are screaming for more help and the journeymen tradesmen are telling us anecdotally they can’t get back into the workforce because they’re on MAT, medication-assisted treatment. There’s a stigma and an education that hasn’t quite gotten there yet for their industry.”

The Recovery Friendly Workplaces-Missouri initiative led by MU Extension was launched to empower workplaces to support people affected by substance use disorders and those in recovery.

The initiative grew out of a 2019 conference on “Opioids and the Workplace” that Swanson organized at UMSL. It explored the role employers can have in combating the opioid epidemic by helping erase the stigma around opioid use disorder and steering people toward treatment. The conference featured more than two dozen speakers and attracted an audience of more than 150 people – including members of organized labor, health care providers, researchers, academics and law enforcement personnel.

Not long after that conference, Swanson was part of a team that secured a grant from the Substance Abuse and Mental Health Services Administration – more commonly known as SAMHSA – to fund the Recovery Friendly Workplaces-Missouri Initiative, and Swanson is serving as the co-principal research investigator on the project.

Swanson and his colleagues, including Rural Opioid and Technical Assistance Project Director Ann McCauley, are aiming to create a network of employers interested in creating healthy and safe work environments that eliminate stigma and support recovery.

So far, they have certified two businesses – Citizens Memorial Hospital in Bolivar, Missouri, and Tower Rock Stone Co. in Ste. Genevieve, Missouri – as recovery friendly workplaces after they completed training and planning and delivered a declaration to their staff stating their support for employees in recovery. Next month a third company, Buddeez Manufacturing in Union, Missouri, will be recognized as Missouri’s latest Recovery Friendly Workplace.

Businesses see benefits in supporting workers in recovery, not the least of which is expanding its pool of potential employees at a time when businesses across the state are finding it difficult to hire workers.

Mark White, a state specialist with MU Extension’s labor and workforce development program, has conducted research looking at demographics in Missouri – with adults hitting retirement age at higher rates than teenagers are finishing high school – and estimated that the state will end the decade with 50,000 workers shorter than it began.

“I came to the university in 2017 expecting to be deeply involved in the worker shortage because I’ve been studying this since the ’90s,” Swanson said. “This was not a surprise. COVID didn’t cause it. COVID exacerbated it. What it means is as the workforce gets tighter, the people who’ve been on the fringe of the workforce for way too long – people with physical disabilities, with mental health disabilities, people who are in recovery, people with mental health problems, people who are justice-involved, veterans dealing with reentry issues coming back from the military – when we had a surplus of workers, employers could look past these individuals. Now we need to be looking at trying to get full employment for everyone.”

Swanson and McCauley have presented on the work of the Recovery Friendly Workplaces-Missouri and the benefits of recovery friendly workplaces around the state and at the inaugural Summit on Substance Use Disorder Stigma Reduction at Penn State University in September. They shared the story of Tower Rock Stone Co., which had an employee with 20 years of experience as a heavy equipment operator who tested positive for methamphetamine. Policies in place called for the employee to be fired, but the safety officer at the quarry helped convince corporate leadership to rewrite its policies and hold the worker’s position while he got into recovery. He got into recovery and returned to work without loss of seniority and has not relapsed. The company saved the expense of hiring a replacement and the years of training it would’ve taken him to reach the same level of competency in the job, and it gained an employee grateful for the second chance who has become an ambassador for their business.

As part of the grant, Swanson conducted a survey with more than 600 businesses across the state that helped reveal the impact that drugs — including prescription medications, alcohol and other narcotics — have been having in Missouri workplaces. Swanson is currently surveying workers to get their perspective on the impact of substance use in the workplace and is inviting students and staff to share their experiences. Take the survey.