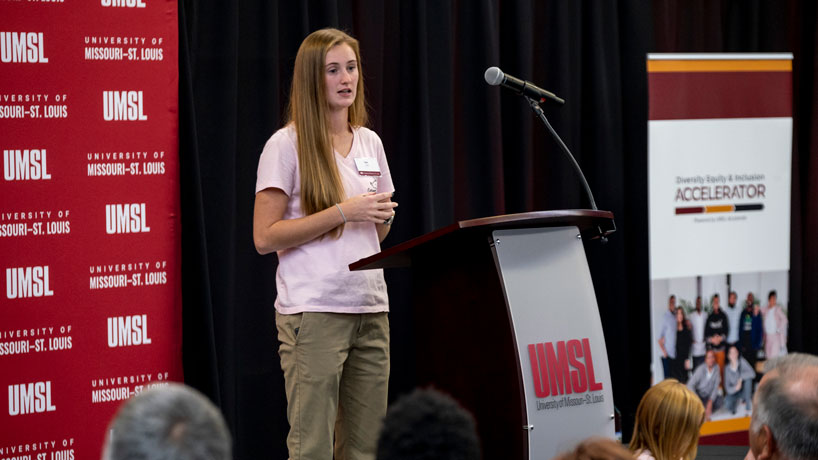 Celsi Lyons had just moved to St. Louis with her then-3-year-old daughter in the fall of 2019 after finishing her associate degree at Lincoln Land Community College in Springfield, Illinois.

She needed to figure out how to make money and still spend time with her little girl as she began pursuing her bachelor’s degree in marketing and management at the University of Missouri–St. Louis.

Lyons worried that if she got a regular job, most of her money would go to childcare, and she wouldn’t be as present for her daughter. But there didn’t seem to be viable alternatives.

But her father, also a single parent and resourceful business owner, taught her there was always a way to make money.

“My dad was a single father, and growing up I watched him go from working his job and he would take us kids,” Lyons said. “He would do side jobs on the weekend. We helped. We learned about everything. And so when I moved to St. Louis, I pretty much had that mindset ingrained in me that, ‘If there’s a will, there’s a way.’”

Lyons, a first-generation college student, had been accepted to the Pierre Laclede Honors College but chose not to follow that path because it required in-person learning and she didn’t have childcare. The flexibility of UMSL’s online course offerings, though, provided a major selling point as she made her college choice.

Prior to starting school, she had been doing odd jobs such as babysitting, house cleaning and working for a food delivery company that allowed her to pay the bills and spend enough time with her daughter. One of those odd jobs was dog-sitting. She looked after a few dogs and over time built up a modest client list.

Gradually, dog-sitting became the most lucrative source of income.

She quit her­­­ other jobs and decided to put more energy behind building her business, Celsi’s Dog Care, as she worked toward her degree.

“Winning the pitch competition felt amazing,” Lyons said. “The competition was a blessing that showed me I am capable of so much more and that there are other people who believe in my vision as much as I do.”

Lyons, among several other winners, took home $3,000 to use for her business.

Lyons’ passion and hard work on her company also earned her a Student Entrepreneur of the Year Award in October. The honor recognized her business growth and acumen. She credits a great deal of her success to the support she’s gotten from the UMSL Accelerate team, particularly Dan Lauer, its founding executive director, who remains a mentor.

“Dan Lauer is extremely helpful,” she says. “He is very encouraging. I can email Dan personally, and he responds and gives honest feedback. He’s pushed me past just the pitch competition. He pushes me to go outside my comfort zone.” 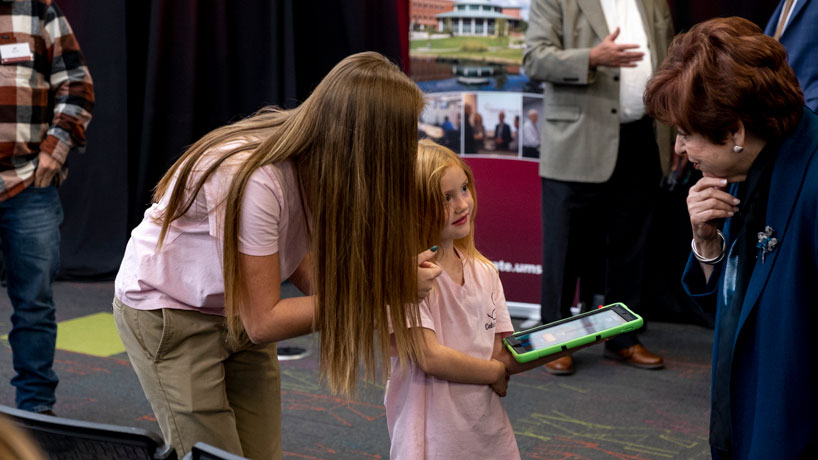 Celsi Lyons introduces her daughter to Maxine Clark, founder of Build-A-Bear and the Delmar DivINe.

Three years after her start at UMSL, Lyons is set to graduate on Saturday and is supporting herself and her daughter full-time with her dog care business. To date, Lyons has over 100 clients, with most of them being daycare and boarder dogs.

Her business courses have helped her understand how to run a small company on paper, while her resourcefulness and will to succeed have helped her with practical experience.

“I would say a majority of it is a ‘learn as you go,’” Lyons said. “I mean, you can look at a textbook and say, ‘OK, that makes sense,’ but until you have to put something into action, I would say it’s not the same. There’s so many variables to everything.”

Lyons company was a natural fit for her as she grew up with a keenness for dogs. Her first dog, Spike, which she got in middle school, is still with her today.

Lyons’ immediate future after graduation will be centered on running and growing her business. Her plans include adding products and possibly finding a new space, as she currently runs Celsi’s Dog Care from her home.

The support Lyons has received from UMSL Accelerate and her professors and UMSL staff has been a significant boon to her personally and professionally.

“UMSL gave me confidence that I’m doing the right thing, academic support to my business strategy and invaluable exposure to networking opportunities,” she said. “UMSL is a diverse community where different voices and life experiences have helped me evolve as a business person and individual.”