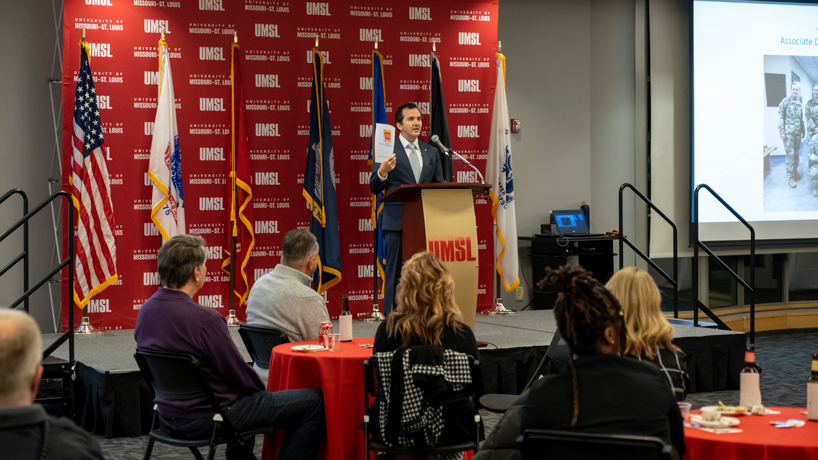 Associate Dean Jim Craig holds up a copy of the strategic plan to create the UMSL Veterans Center while speaking at a celebration to mark its 10th last week in the Millennium Student Center. (Photos by August Jennewein)

Josh Evans recently went looking through storage in Clark Hall and found the blue posterboard used 10 years ago at the grand opening of the Veterans Center at the University of Missouri–St. Louis.

Evans, the coordinator of the Veterans Center, had it on display in the Century Rooms of the Millennium Student Center last Wednesday night as members of the campus community gathered exactly a decade later to mark the anniversary.

The evening event offered a chance to celebrate the invaluable service the center has provided thousands of military-connected students since its founding. Those in attendance paid special tribute to the role Associate Teaching Professor Jim Craig has played in making it into what it is today.

“In any given semester, we have approximately 300 to 350 student veterans, and they bring to our campus community a wealth of unique strengths, such as discipline, work ethic, maturity, a focus on achievement and progress that is mission-minded,” Evans said. “They bring lived experience with core values, leadership and followership skills, to name just a few. Assisting veterans as they transition from the military to academia is central to our work. We walk alongside them, to engage and empower them to build on the strengths that they bring and to develop and gain new knowledge and skills they can use in their future.

“We serve as a first-stop resource for our vets. When they have any issues on campus, they call us, and we talk it out. We figure out what they need, and we get them connected to whoever on campus can help them.” 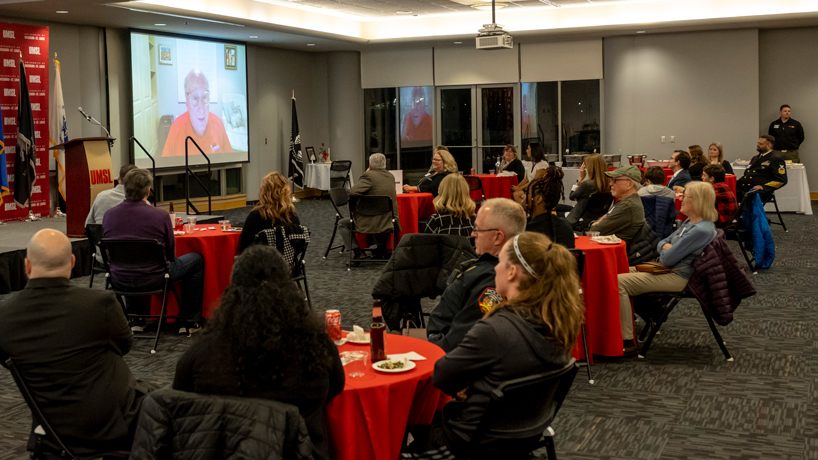 Retired Dean Ron Yasbin shares the origin story of the UMSL Veterans Center while speaking in a recorded video that played during the center’s 10th anniversary last Wednesday in the Century Rooms of the Millennium Student Center.

That type of support didn’t exist 10 years ago, as former College of Arts and Sciences Dean Ron Yasbin relayed while sharing the origin story of the Veterans Center in a video he recorded for the anniversary event.

At the time, in his role as dean, Yasbin had a standing student advisory group that was self-selecting.

“Basically, any student in Arts and Sciences could be part of the group,” he said, “and we would meet regularly to discuss their ideas, problems and what they weren’t happy about.”

During one meeting, half of the attendees were veterans, and they told Yasbin about how they were being “ping-ponged.” They found themselves unable to register for classes until their VA benefits were processed, but they couldn’t get their benefits approved until they registered for classes, and there was no one to help them navigate through the red tape.

Benjamin Ebert, a Navy veteran pursuing bachelor’s and master’s degrees in criminology and criminal justice, learned exactly what the experience was like while studying at a previous institution.

“There was no designated space for veterans to go, no designated person to help,” he said. “The person who was helping us fill out our paperwork was just somebody in the student affairs office who didn’t know anything about that. The paperwork they had me fill out initially wasn’t even the correct paperwork, so all my payments got denied. I actually had to do my own research, Googling things online and calling 1-800 numbers and figuring out how to sign up for my own college there.

“When I came here, it was like a completely different process.” 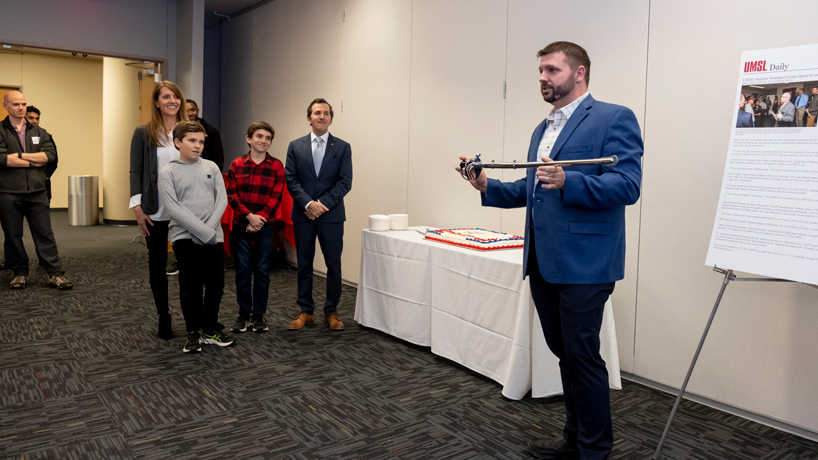 Veterans Center Coordinator Josh Evans holds up a U.S. Army Officers’ Saber, he presented to Associate Dean Jim Craig. Craig was joined by his wife, Susan, and their two sons at the presentation.

That’s because Yasbin heeded the words of the student veterans on his advisory committee and set out to do something about it. He sought help from Craig, at the time a lieutenant colonel in the U.S. Army, who served as commander of the St. Louis Area Army ROTC program and was a member of the dean’s executive committee.

Together, they helped develop a plan to create a veterans center housed jointly in an academic department and in the Division of Student Affairs that could provide all-inclusive assistance to veterans transitioning out of service into academic life.

Curt Coonrod, then UMSL’s dean of students, was a strong supporter of the concept, and then-Chancellor Tom George became a proponent of it as well.

It was housed initially in the newly created Department of Military and Veterans Studies. Craig, who’d been getting set to retire from the Army, was offered the opportunity to lead the department, and he worked with interim director Ryan Barrett to launch the center and ensure its success.

“Ten years later, we are still dedicated to the same mission,” Evans said. “When a veteran chooses to come to UMSL, we work to support them from the moment they come in through the moment they leave.” 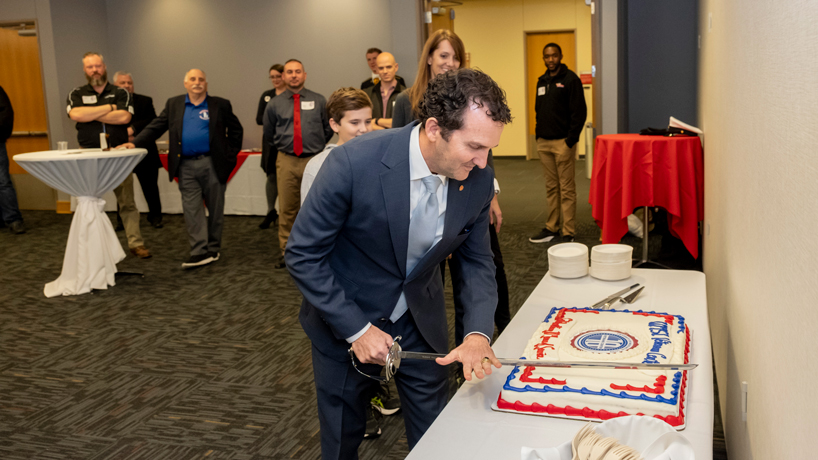 That starts with certifying their Veterans Affairs and Department of Defense education benefits, working closely with Student Financial Services, Academic Advising and the Office of the Registrar to ensure all the requirements are fulfilled.

Staff in the Veterans Center also work to set military-connected students up with other campus resources, and the center itself is a welcoming place where veterans new to campus can find students with similar life experiences who can offer camaraderie and support.

“The veterans center isn’t an island or a bunker,” said Robin Kimberlin, the director of Student Advocacy and Care who has overseen the Veterans Center for the past year. “Our job is to get veterans on to their next path of success.”

That means helping them become integrated in the rest of the campus.

The formula has proved successful and gotten attention elsewhere. UMSL has been named to Military Times’ “Best for Vets: Colleges” list each of the past eight years.

Craig has remained a staunch advocate on behalf of student veterans, working with previous Veterans Center directors Barrett, Rebecca Abbott and Joshua Perschbacher and now Evans. But as his own academic career has grown, becoming chair of the Department of Sociology and associate dean in the College of Arts and Sciences, he has less day-to-day interaction with the Veterans Center.

He was uncomfortable accepting all of the praise heaped on him during the anniversary celebration.

“I might have helped to build it, but what’s happened is the university has taken it on,” Craig said. “This is theirs, not ours anymore. That’s the most exciting thing. The structures, the support, the students and the faculty and the staff who care about veterans – it’s become the institution’s culture.”