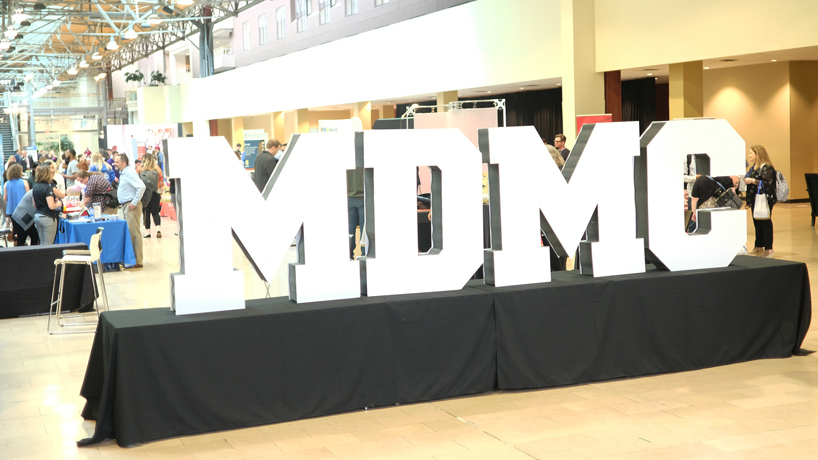 More than 1,850 attendees flocked to St. Louis Union Station for this year’s Midwest Digital Marketing Conference last Wednesday and Thursday. The event, hosted by the UMSL College of Business Administration, drew the biggest crowd in its seven years of existence. (Photos by David Morrison)

In two adjoining rooms at St. Louis Union Station, students migrated from table to table, resumes in hand, meeting with the 20 companies involved in the Marketing Student Intern and Career Fair at the Midwest Digital Marketing Conference on Thursday.

Jessica Parrott, a communication student at the University of Missouri–St. Louis was working the conference as a volunteer but made a point to step away from the help desk so she could network with some potential future employers. “I am meeting new people but also learning a little about their company, which makes me want to research more,” said Parrott, who is on track to graduate in August. “Getting to know the people behind the company is definitely opening my eyes and mind to who I could potentially be around and work for. Volunteering for this as well, it’s opening my eyes to what’s really around. It’s been a great day.”

Parrott was one of 40 UMSL students and 120 total students who attended this year’s MDMC last Wednesday and Thursday. In its seventh year, the MDMC, which is hosted by the UMSL College of Business Administration, drew more than 1,850 attendees – its most ever – to an event that included more than 80 learning sessions and panels.

Tech giants such as Facebook and Google were represented among the more than 100 speakers that dropped knowledge in the realms of data, digital marketing, social media, content creation, e-commerce, innovation, academics, technology and entrepreneurship.

Anvil Analytics + Insights, a data-driven digital agency based in St. Louis, served as the title sponsor for this year’s event, and CEO Jenny Bristow led a breakout session on leveraging data for use in marketing.