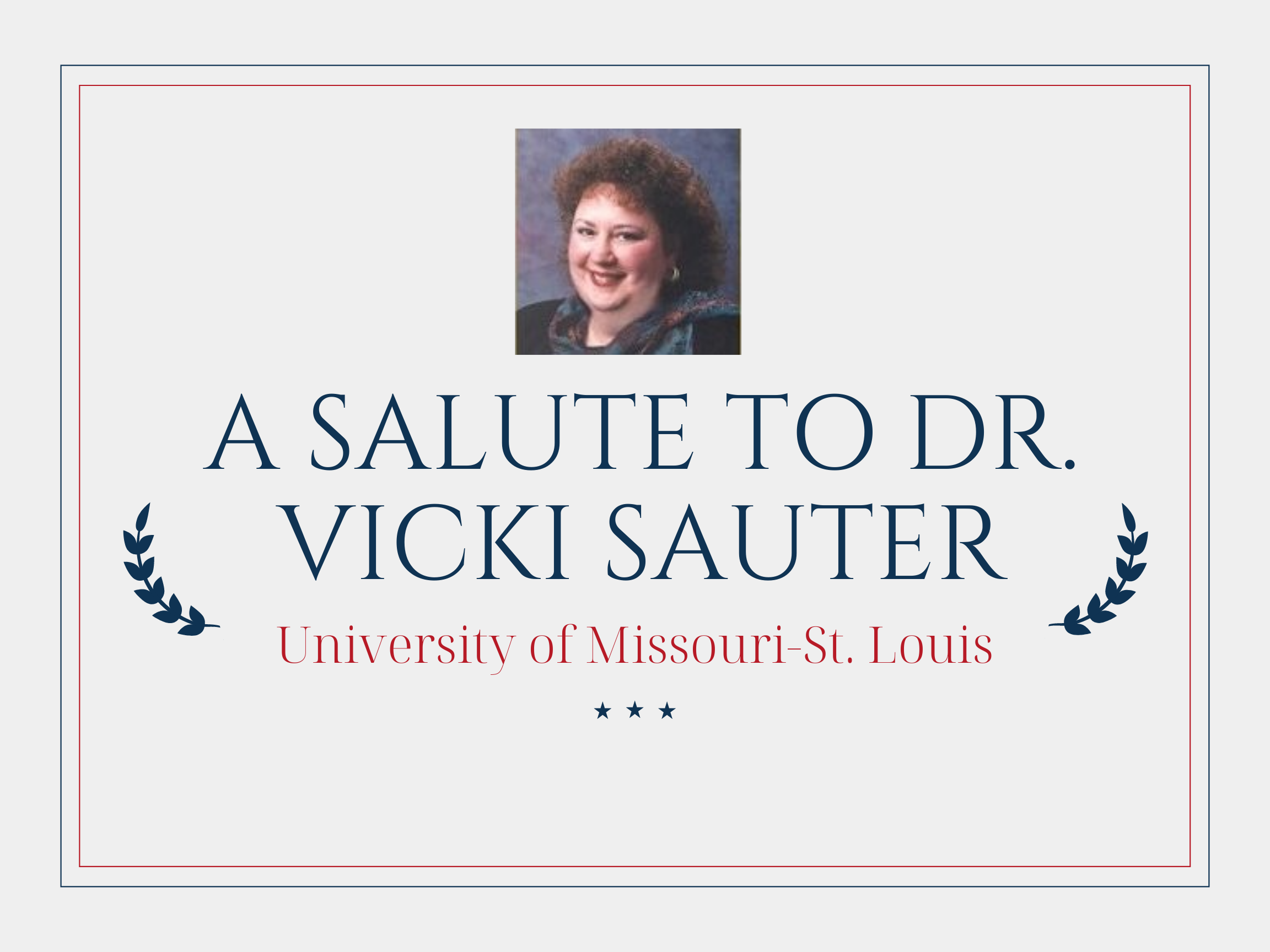 A Salute to Dr. Vicki Sauter

(This article is based on an email interview with Dr. Mirchandani.)

Dr. Vicki Sauter has been a member of the University of Missouri – St. Louis faculty since 1980. She received her B.S. Industrial Engineering and Management Sciences, M.S. Systems, and Ph.D. System Management Science all from Northwestern University. She teaches several Information Systems Analysis and Decision Support Systems for business intelligence courses at both undergraduate and graduate levels, as well as a business forecasting course. She was described by UMSL Information Systems Department Chair, Dr. Dinesh Mirchandani, as “committed to the highest ideals of teaching.”

Dr. Sauter was the first woman in the UMSL College of Business Administration to earn tenure. She also helped develop many of the courses within the College of Business Administration. The Advanced IST Lab in ESH 200 was created with funds that she raised from corporate and alumni donors. Recently, she led the creation of UMSL’s Graduate Certificate in Business Intelligence and the creation of the Interdisciplinary Undergraduate Entrepreneurship Certificate.

One of Dr. Sauter’s main courses is Information Systems Analysis. She teaches this course in a service-based format where students focus on an actual non-profit organization. They then  analyze the organization’s existing information systems to identify real life problems and propose solutions, enhancements, or alternative systems. The class practices lateral thinking for creative problem solving. Students must learn which problems are real and which are simply symptoms of other problems. Not everything is theoretical or technical, either. Problems are solved with technology as well as new job descriptions, changes in workflow, and other low-tech solutions to encourage real life creativity, critical thinking, and communication.

A former student applauded her class by saying, “For all the time I spent earning an undergraduate degree, the lessons I learned from Dr. Sauter’s Systems Analysis class stand out most. It’s the “algebra” that I use nearly every day in my career.”

Students interact directly with real clients on a regular basis and create detailed reports, which they can use in a portfolio for prospective employers. Some organizations in which students have helped include St. Louis Mended Little Hearts, American Pediatric Heart Fund, and the Jennings School District, as well as several other non-profits.

“A person cannot really learn something without doing it.  By analogy, learning systems analysis is similar to learning how to ride a bicycle.  The instructor can explain the concept of balance perfectly, but the new bike-rider will still need to wobble, and probably fall off a couple of times before he or she knows how to implement the concept of balance.  I believe that it is better to fall off that bicycle on soft grass rather than hard concrete in the middle of traffic.  Hence, I encourage my students to do homework and discuss their projects in class (for which the penalty for failure is quite small), to complete milestones for their projects (for which the penalty for failure is still low, but it has more impact on their grades) and finally to finish the final project (for which failure might be a significant); all of the risk in our class is less than it is in the real world where the penalty might be very significant.”  – Dr. Vicki Sauter

Involvement Outside of Class

When she was 18 years old living in Chicago, her father was murdered outside of her family’s home. A neighbor later expressed her regret that she had not been able to help him. In Dr. Sauter’s words, “That’s why I get involved. I never want to give an apology to anyone for not helping out.”

In addition to her academic leadership, Dr. Sauter is highly involved with the university outside of classes. In April of 2013, she was awarded the UM President’s Award for University Citizenship, honoring her leadership, mentoring, and service to students. A former student stated, “Dr. Sauter is usually in her faculty office and more often than not she is providing assistance to a student or discussing the curriculum with a peer. Outside of the classroom, Dr. Sauter is the most involved professor imaginable.”

In 1994, she created the Information Systems Mentoring Club at UMSL to find mentors for Information Systems and Technology students among UMSL alumni and the local business community. The club helps students develop technical IS skills, as well as soft skills such as resume-writing, interviewing, and networking. The mentors who connect with students through this club have helped students find jobs and industry success by being knowledge sources and advocates for the club members.

In 2004, Dr. Sauter created a museum called Grace’s Place in Express Scripts Hall at UMSL in honor of the first female computer programmer, Admiral Dr. Grace Murray Hopper. The museum is filled with a range of exhibits, from early tubes and analog computers, to more recent microcomputers. Many of the computers are  disassembled with their individual components on display.

Dr. Sauter curates and documents every item in the museum’s collection. She conducts tours for student groups and university visitors. Visitors can learn about vintage computers and their evolution into today’s powerful machines and especially about Dr. Grace Hopper and her contributions to computing. She has worked selflessly, receiving no compensation, for almost two decades, to inspire and educate through Grace’s Place.

XTremeIT! was a weeklong residential summer camp at UMSL created by Dr. Sauter. From 2008 to 2015, almost 150 students from 36 different high schools in St. Louis participated. The camp provided underprivileged teens exposure to college life and technology careers. The students lived in UMSL’s dorms, where they built games, mixed music, and created art in UMSL’s technology facilities and classrooms. They visited companies as well, among which were Ameren, Boeing, Express Scripts, Edward Jones, and Microsoft, where they learned how IT is used in real life business processes. Most students involved chose to continue further in college after graduating from high school.

In 2015, Dr. Sauter started a program to send UMSL students to the Grace Hopper Conference for Women Technologists. She hoped to help students network with professionals in their field and learn about the challenges faced by women in the technology industry. So far, Dr. Sauter has raised money for over 40 students to attend the conference. Attendees have described the experience as “transformational”.

In 1997 she published Decision Support Systems: An Applied Managerial Approach.

In 2011 she published Decision Support Systems for Business Intelligence.

According to Department Chair Dr. Mirchandani, her textbooks are among the most influential in the discipline and have been studied by countless students. Her articles are widely cited and have influenced research and practice.