International Day of the Girl @ UMSL

“International Day of the Girl” is a day that celebrates the incredible potential of girls all over the world. It was launched by the United Nations General Assembly on October 11th 2012.

The theme this year is “GirlForce: Unscripted and Unstoppable”. It particularly focuses on education, completing school and achieving their dreams. For this year’s International Girls Day I was lucky to meet with Dr. Marie Mora the new Associate Provost for Academic Affairs at UMSL.

Dr. Mora has been an active researcher during her career. She has also been named one of the “75 Top Economic Influencers to Follow” by Focus Economics and has served as a past president and founding member of the American Society of Hispanic Economists.

Dr. Mora has led various women’s initiatives at UTRGV and she has just launched a Women’s Faculty Network at UMSL. She is one of the most inspiring and passionate people I’ve met in UMSL so far. In the short time I spent with her I gained so much knowledge, not only was she interested in women empowering groups in UMSL, Dr. Mora also give me advice on economics as a subject. She also recommended me to read and subscribe to “The Financial Times” as it would help me in my future classes. It was a pleasure meeting Dr. Mora and I’m so glad she could take time off her busy schedule to meet me!

Dr. Mora is a great role model for the future GirlForce and UMSL is very lucky to have her be part of our academic community. 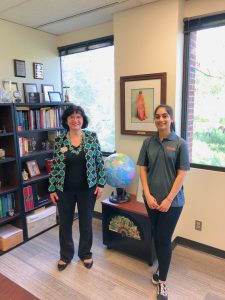