Halloween is Upon Us!

An UMSL Student’s Guide to Halloween

Halloween is this Saturday and St. Louis is taking part in the festivities. Below is a historical feature on why Halloween is celebrated (especially in America) and St. Louis’ more spooky side.

October 31st was the Eve of the Celtic New Year. Patrons would celebrate the Feast of Samhain (Lord of the Dead) on this day; they would bake goods to be scattered throughout town for Samhain’s ghosts to find. This day also marked the end of the harvest yield and that winter was coming. All Hallow’s Day was also to be celebrated before the Catholic observation of All Saints Day.

Immigrants from Celtic regions (Ireland, Wales, Scotland) brought their All Hallow’s Day or Halloween traditions to America around the 1840s. Today American schools will hold festivals, neighborhoods will hold block parties, and children in costumes will “Trick-or-Treat” (collecting candy) in honor of this holiday.

A Famous Haunting near UMSL

From January to April of 1949, a demon-like-nature seemed to plague a young 14-year-old boy. Now this might sound like the fabrications of Hollywood; however, this event and date has been documented in St. Louis history. These events inspired William Peter Blatty’s 1971 novel The Exorcist and 1973 classic movie of the same title. Blatty’s renditions are highly fictionalized (with the setting changing to Washington D.C. and a demon’s victim being that of a 12-year-old girl).

Although St. Louis is the backdrop of these events (but not for The Exorcist rendition), it’s fascinating to note the location of the suburban home that the boy was first brought to. The home has been known to sit within the Bel Nor neighborhood – less than a mile away from the future site of the University of Missouri-St. Louis, which was founded in 1963.  Hard to believe such a famous haunting occurred so close to campus.  If scary movies are more your thing, try watching the classic horror film it inspired, 1973’s The Exorcist. But don’t say we didn’t warn you!

From the UMSL Global Team, we hope you have a safe and happy Halloween!

Because of you, our annual Pumpkin Carving Event was a success! 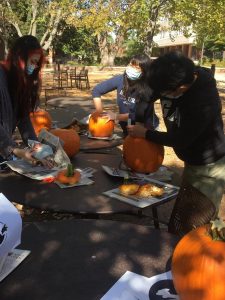 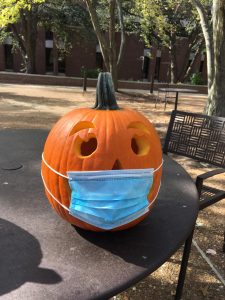 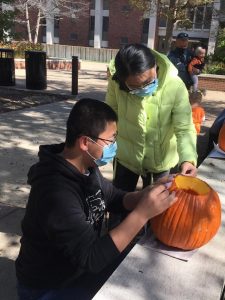