Halloween is Upon Us!

An UMSL Student’s Guide to a Thanksgiving Culinary Classic

As fall break approaches at the University of Missouri- St. Louis, students are reminded that the Thanksgiving holiday is just around the corner. Food is the common center point of this American celebration and the green bean casserole is no exception. Dorcas Reilly’s green bean casserole has been a side staple for over 60 plus years; with only six key ingredients it’s so easy to assemble. Below is a feature on the classic casserole’s surprisingly commercial origins.

During post-WWII America, the technology in which canning and freezing packaged food had progressed greatly for easier food accessibility. This, paired with the lift of canned good rations, allowed for working wives to prepare cheap, fuss-free meals. This had the Campbell’s Soup Company thinking: how do they market their product while providing a simple recipe for American families? Their solution: the green bean casserole. 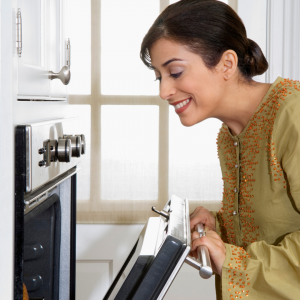 In 1955, the supervisor of Campbell’s Home Economics’ Test Kitchen, Dorcas Reilly, was put on a mission. Their goal was to give Campbell’s a product that could be relayed to the Associated Press. Herself and her New Jersey-based team looked, tried, and crafted recipes with household ingredients that any American cook would have. Through trial and error, Reilly landed on the green bean bake or casserole as called by a later date.

Her recipe included Campbell’s Cream of Mushroom soup, green beans, and fried, crunchy onions to name a few of the six ingredients. Reilly achieved three critical factors with this recipe: there was a minimal prep time, one could use fresh or frozen green beans, and it allowed for pre-packaged cooking. The campaign proved to be a marketing win for Campbell’s; these days an estimated 20 million Americans have green bean casserole for Thanksgiving. 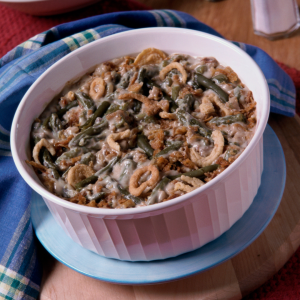 To this day the recipe can be found printed on Campbell’s Cream of Mushroom soup cans. Whether the chef preparing this dish is a UMSL Global staff member, international student, or someone just looking for something new, this recipe is always a crowd-pleaser! Check out Dorcas Reilly’s recipe at Campbell.com  It only takes 10 minutes to prep and feeds six UMSL students!