An UMSL Student’s Guide to a Delightful American Treat 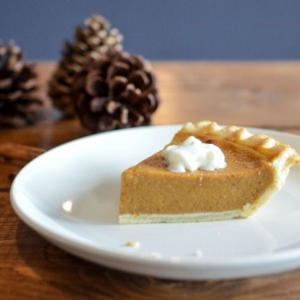 With Thanksgiving being a week away, the students and faculty at the University of Missouri- St. Louis may already be preparing their menus for the lunch or dinner occasion. If this is a holiday first away from home or as an International Student to the states, UMSL Global welcomes you to the occasion! This essay features a culinary desert that has been a classic since the 1600s: pumpkin pie. Below is a feature on the history of the pumpkin pie’s popularity and how students and faculty can cook their own.

Before the arrival of English Pilgrims to America, pumpkins had already become a popular kitchen-side staple to the English diet. Although pumpkins are native to the North American continent, early traders introduced this gourd to Europe (during the 1500s) before the first official Thanksgiving. English cooks had previously crafted crust filled pies with meat, vegetables, or even fruit (think of today’s Shepard’s Pie). Yet with the introduction of pumpkins into the English diet, the economic friendly meal turned for the better. As a result, pumpkin pies have long since been documented in English American cookbooks since the 1600s.

The popularity of pumpkin pies didn’t grow in favor till about the 1800s in America. It was not until about 1869 that staple became associated with the holiday of Thanksgiving. Today, this transformed desert is commonly featured on American kitchen counters for the celebratory November feast. Ready to bake your own slice of history?  Check out this iconic recipe, which serves 8 UMSL students.  A sure classic, don’t be surprised if your UMSL guests ask for seconds of this delightful treat!