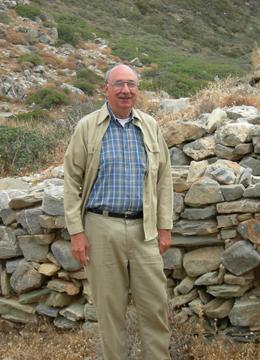 Archaeologist Philip Betancourt will give the lecture “Excavation in the Hagios Charalambos Cave” at 7:45 p.m. Oct. 13 in Century Room C at the Millennium Student Center at UMSL.

High up in remote parts of the Greek island of Crete is the tiny village of St. Haralambos, known as Hagios Charalambos. Archaeologist Philip Betancourt has spent years excavating a small cave at the edge of this village which was once used as the burial place for the Minoans people who lived in the village, thousands of years ago.

Betancourt, the Laura H. Carnell Professor of Art History and Archaeology at Temple University in Philadelphia, will discuss “Excavation in the Hagios Charalambos Cave” at 7:45 p.m. Oct. 13  in Century Room C at the Millennium Student Center at the University of Missouri–St. Louis.

The lecture will follow the Annual Report of the Greek Professorship presented by Michael Cosmopoulos, the Hellenic Government-Karakas Family Foundations Endowed Professor of Greek Studies and professor of archaeology at UMSL. A reception will begin at 7 p.m.

The bones and burial offerings at Hagios Charalambos cave were deposited years after the people died. In a great ceremony, the bones of the deceased were sorted and carried along with other objects from their original tombs to the cave.

Betancourt was invited by the Greek government to form a project to excavate the site before looters could steal the objects and destroy their context. A joint Greek-American expedition under Betancourt’s direction uncovered the material and preserved it for study. Among the finds are gold diadems, stone vases, seal stones, metal tools and weapons and carved figurines that are on view in the archaeological museum in Hagios Nikolaos in Eastern Cete.

The lecture and annual report is free and open to the public and sponsored by the Karakas Family Alliance for the Advancement of Hellenic Studies, the Hellenic Government-Karakas Family Foundation Professorship and International Studies and Programs at UMSL.