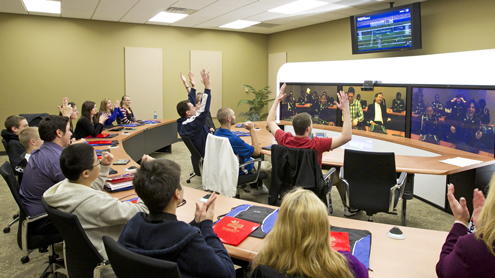 A dozen high school students from Oakville High School (St. Louis County) took to the field – or the TelePresence Room – at the University of Missouri–St. Louis on Tuesday to battle against their Kansas City, Mo., counterparts in the annual Financial Football Show-Me Showdown.

Grant Black, director of the Center for Entrepreneurship and Economic Education at UMSL, said the event is geared toward promoting financial education.

Financial Football is a fast-paced, educational video game developed by Visa to creatively test students’ money management skills. During the interactive game, each team of students answers financial questions that allow them to move down a simulated football field and score touchdowns.