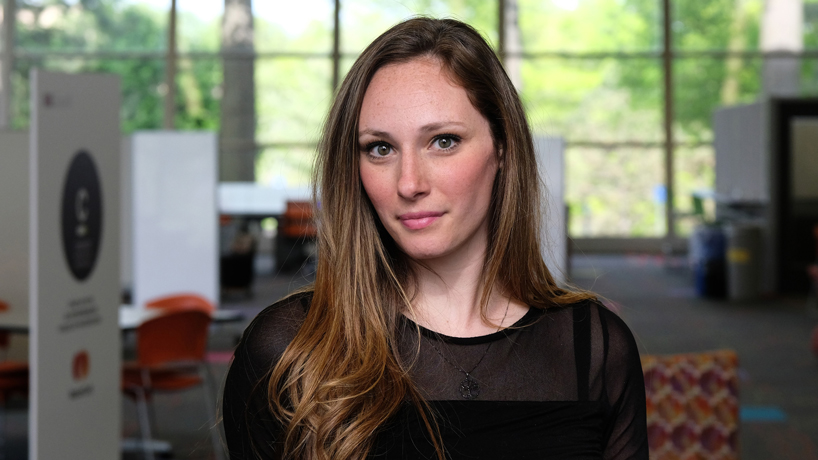 Katya Sussman’s path to her educational specialist degree in school psychology actually started in what may at first seem like an unlikely place – a dance class. (Photo by August Jennewein)

Katya Sussman is about to become the 100th graduate of the school psychology program in the College of Education at the University of Missouri–St. Louis.

She’ll officially earn her educational specialist degree on May 14, and like most of her colleagues in the program – which maintains a 100 percent job-placement rate for its students within one month of graduation – she already has a full-time position lined up.

She’ll continue to serve as the sole school psychologist for two different schools in the Hazelwood School District where she has already been interning for the past year.

What really makes Sussman special, however, is her unique journey, the drive that fuels her every endeavor and the accomplishments she’s achieved over the past three years – accomplishments that will help shape the legacy of what continues to be the only educational specialist program approved by the National Association of School Psychologists (NASP) in the state of Missouri.

Believe it or not, it all started with dance.

“I am not the traditional student in any way shape or form,” Sussman recently explained while sharing her story in UMSL’s bustling Millennium Student Center. “I actually got my bachelor’s degree in dance from a college in Pennsylvania, and then I performed for five or six years professionally all around the United States.”

It was after she stopped performing and settled down to teach dance that a whole new direction for her life’s work began to take shape.

“I ended up teaching a course for students with disabilities,” Sussman said, “and I had a student with Down syndrome. As we worked together, she began to make leaps and bounds both socially and emotionally. She started interacting with her peers and also ended up becoming a really good mathematician and a scholar. Her parents were really excited and told me about all of this – about how her tutors were seeing so much improvement all stemming from dance. That’s when I began to think, ‘Well, maybe I’ll go into special education.’”

Sussman set out to earn her teaching certification and then taught kindergarten through fifth grade in a self-contained classroom for students with varying disabilities for a year and a half. From there, because her supervisors felt she excelled in the areas of behavior management and modification, she was moved into a classroom for third through fifth graders with behavioral challenges.

“I started working really closely with a school psychologist at that school,” Sussman recalled. “We started doing behavior analysis and putting in behavior interventions, and the resulting gains we saw were so wonderful. It was that experience that made me realize I wanted to be a part of bigger, more systematic changes in education.”

Sussman applied to multiple school psychology programs, but it was at UMSL that she found faculty with a kindred focus.

“The program’s NASP approval may have been what first drew me in, but then I met Don and Mike,” Sussman said, referring to Associate Clinical Professor and Program Founder Don Gouwens and Associate Professor Michael Bahr. “They have so much passion. They live their work, and they regularly talk about that system-level change. They say that yes, there’s testing and yes, there’s assessment in school psychology – and they certainly give you those important tools. But they also ask you to go above and beyond and advocate for that larger educational change that is so needed.”

Sussman took that call to action and advocacy and ran with it. She has since incorporated it into everything she does, and she’s helped make it an even larger part of the program for future generations.

As one example, the now annual Brunch with a Senator event – hosted by UMSL’s Graduate Association of School Psychologists (GrASP) and this year featuring State Senator Jamilah Nasheed – was first spearheaded by Sussman when she was the student organization’s president.

GrASP, under Sussman’s leadership, also played a vital role in helping to develop and facilitate expert panels between members of the school psychology program and administrators from the Special School District of St. Louis, which hires many of the program’s graduates.

“The goal is always to bring everyone together for better understanding, progress and collaboration,” Sussman said. “The expert panels and other discussions give us an opportunity to ask questions like, ‘What do you see as the school psychologist’s role?’ and ‘How do you utilize their skills?’ And then we also have the chance to say, ‘Have you ever thought about using our knowledge and skills this way?’”

This year, Sussman was asked to be part of DESE’s Missouri State Improvement Plan for education and also asked to be the co-advocacy chair for the Missouri Association of School Psychologists. She recently spent two weeks in Jefferson City advocating for – among many other issues – more school psychology programs across the state.

“We’ve been able to generate a lot of interest on that front, and it is truly fantastic because ultimately, if we have more of us, then we can do more and provide more services for the children and families of Missouri,” Sussman said. “That’s the goal and that’s what we’re all here for.”

In addition to her many other accomplishments, the soon-to-be graduate was also recently notified that she won this year’s NASP Public Policy Institute Scholarship for Advocacy in Action.

The honor will send her to Washington this summer to attend a three-day conference that will share insights on how to successfully initiate grassroots advocacy efforts in the state of Missouri and beyond. (Interestingly, though the award is only given to one student nationwide each year, last year’s winner was also a UMSL school psychology student – Sussman’s classmate Kara Long.)

All of this, and yet Sussman has also maintained the busy Hazelwood internship she will continue in her new capacity next fall.

On any given day, she may be found consulting with teachers, administrators and parents, facilitating groups for children who struggle with behavioral challenges or providing assessments and gathering data to help bring the full picture of one of those student’s individual strengths and challenges into focus. Most often, she’s performing some combination of all of the above – and more.

Sussman is honest about the fact that it can be a very challenging, very exhausting job.

Then again, if it weren’t, it probably wouldn’t be for her.

“I don’t have a stop button or a slow-down button,” Sussman said. “I can’t refuse a lot of things, especially if I know it’s going to improve outcomes for a child and a family. That’s what keeps me going. That and the fact that I don’t want it to be about just one child or just one school.”

That drive to always be thinking about the bigger picture and the greater good is something Sussman said she most likely picked up from her family.

“My father was a remarkable and renowned anthropology professor who devoted his entire career to advocating for social justice. My mom is an anthropologist as well and my aunt is a social worker/artist,” Sussman said. “So, essentially my whole family has always been very into social service and making sure that we are creating a better world for the next generation. It’s something I grew up with, and it is just part of me now. I can’t escape it, and I wouldn’t want to.”

Because at the end of the day, the children make it all worth it – children like the one who recently left a note on Sussman’s office door.

She was gone for the day and the student, who’d recently had a prolonged absence due to a traumatic event, left it for her to find when she returned.

“It’s those moments,” Sussman explained, “where you get that tough cookie that finally opens up or the person who needs that assistance and suddenly you know they won’t get it from anybody else. Those moments are everything.”

“If you think the school is where future generations become citizens and learn to be fully abled adults, if you feel like change stems from education, then give school psychology a try. We aren’t just testers and placers. We are truly trained in looking at the educational system as a whole and seeing how we can make it better and brighter not only for our educational future, but for the children of the next generation as well.”