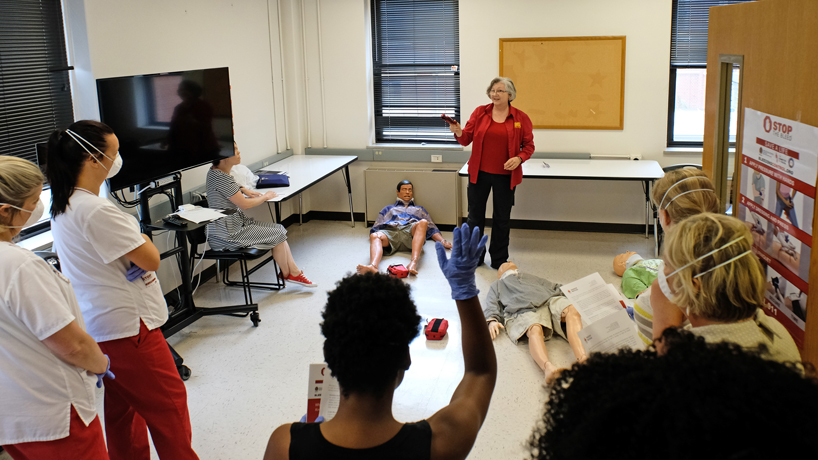 Roberta Lavin, associate dean for academic programs in UMSL’s College of Nursing, led a hands-on, disaster and chronic disease preparedness workshop in Seton Hall on July 27. The joint effort between UMSL, SLU and Johns Hopkins University was funded by a cooperative agreement through the CDC and AACN. (Photos by August Jennewein)

Four different classrooms inside Seton Hall on the campus of the University of Missouri–St. Louis saw quite a transformation on July 27. For one afternoon, a group of professional nurses and students-in-training were asked to imagine each space as something different: the working parts of a disaster zone.

One room became the health department, another a hospital emergency department. The third transformed into a field site, and the fourth a casualty area.

The simulations were all part of an innovative workshop on disaster preparedness, a joint effort between UMSL, Johns Hopkins University and Saint Louis University that was spearheaded by UMSL’s Roberta Lavin.

Now the College of Nursing’s associate dean for academic programs, Lavin has had a long career in disaster management. As a former U.S. Public Health officer, she’s seen her fair share of emergency situations, from hurricanes to mass evacuations to 9/11.

The relationships she’s formed over the years were an integral part of making the workshop a reality. As she set to work securing the grant from the CDC and the American Association of Colleges of Nursing that would ultimately fund her efforts, several colleagues came to mind. 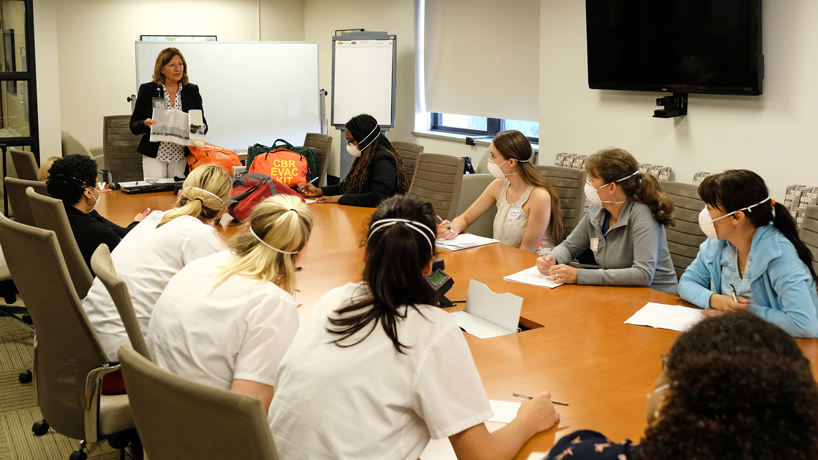 Joanne Langan, associate professor and associate dean of undergraduate and prelicensure education in SLU’s School of Nursing, was one of Lavin’s collaborators for the disaster preparedness workshop.

“I knew that Joanne Langan at SLU shared my interests,” she said, “and Johns Hopkins’ Tener Veenema and I have worked on projects together since the late ’90s. It seemed like a natural partnership, so I asked if they were interested.”

Lavin and her peers have a straightforward purpose in mind for their work. Ultimately, they want to better prepare both student and professional nurses for the disasters and public health emergencies they may one day face on the job.

Such training is crucially needed according to Lavin’s research. Presented at the workshop by UMSL’s Rick Zimmerman and SLU’s Rachel Charney, her recent survey of students, health-care professionals and administrators revealed detriments both in educational training opportunities and feelings of confidence when it comes to real-world disaster preparedness.

UMSL nursing student Tuanette Johnson said the gaps the survey illustrated were certainly things she could relate to – prior to her experience of the workshop, that is.

“We learn so many different important skills in nursing school,” she said, “but this subject is something that isn’t often a big focus. There’s so much to these situations and so much that I’ve heard maybe a little bit about, but today we really got to focus on it. We really got to see how important this is and how much there is to learn. It makes me want to learn more – and maybe even become part of an organization that is doing this kind of work.” 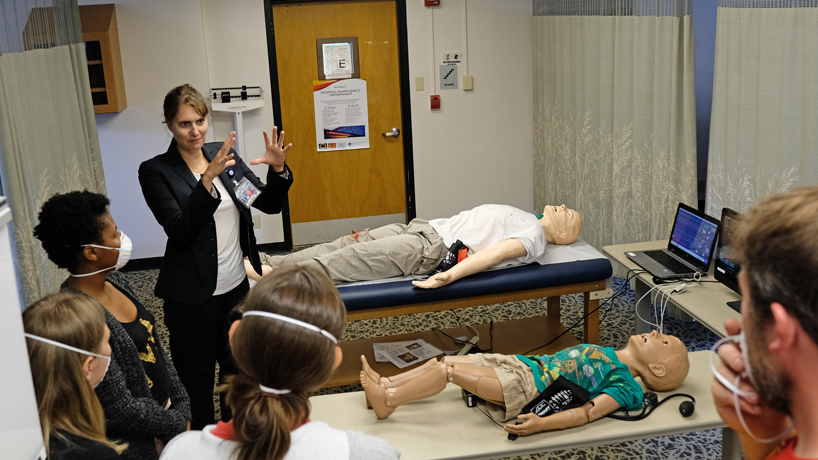 Rachel Charney, a pediatrician and associate professor within SLU’s School of Medicine, led the hospital emergency department simulation portion of the workshop.

Throughout the course of the day, Johnson and her fellow attendees were guided through online, interactive toolkits that Lavin and her colleagues designed to help them explore and learn from three real-life scenarios. The toolkits focused on 9/11, Zika and the Flint water crisis – events chosen specifically because of the wealth of knowledge they can offer and the wide-reaching, population-level impact they continue to have.

“9/11 resulted in first responders, fire and police being exposed to air particulates from the pile that had devastating health consequences for many of them,” Lavin explained. “Zika not only impacts the person infected, but can have serious health consequences for pregnant women and their babies. The children with lead poisoning from the Flint water crisis will have long-term health consequences. In all of these instances we must look at what is needed for the population and recognize that while we combated the immediate problem, we must monitor and care for those impacted for the rest of their lives.”

While participants learned about these long-term risks and concerns for their potential patients, another aspect of the conference taught self and family preparedness.

As Lavin put it: “You can’t be a nurse in a disaster if you don’t have a plan for how to take care of yourself and your own family while you work to save lives.”

As a result, every workshop attendee committed to making a three-day, emergency “go bag” and an extensive family plan – just in case.

This was an element of the workshop Johnson found especially helpful.

“It’s something we underestimate,” she said, “that it’s about making sure you take care of yourself as well. We’re nurses and we’re called to just jump in and help, but this is teaching us to think before the jump – because how can I help that person if I end up hurt myself?”

Finally, the culminating event of the day were those simulations throughout Seton Hall that lasted more than two hours and had participants weaving in and out of different scenarios, all the while with protective masks in place.

Rather than a 9/11 or Hurricane Katrina-level event, the practiced disaster was a residential building fire and collapse.

The scenario was chosen with great purpose and provided yet another lesson among many: Disasters don’t have to garner national attention to be real and devastating.

“Residential fires occur every day in every country. They are the most common disaster to impact an individual family,” Lavin explained. “We wanted students to understand that an apartment fire in a small community with only a small hospital could indeed be a mass casualty event for that particular community.”

To learn more about Lavin’s efforts to expand population-focused disaster preparedness training – or to access the toolkits used in the workshop – follow this link.