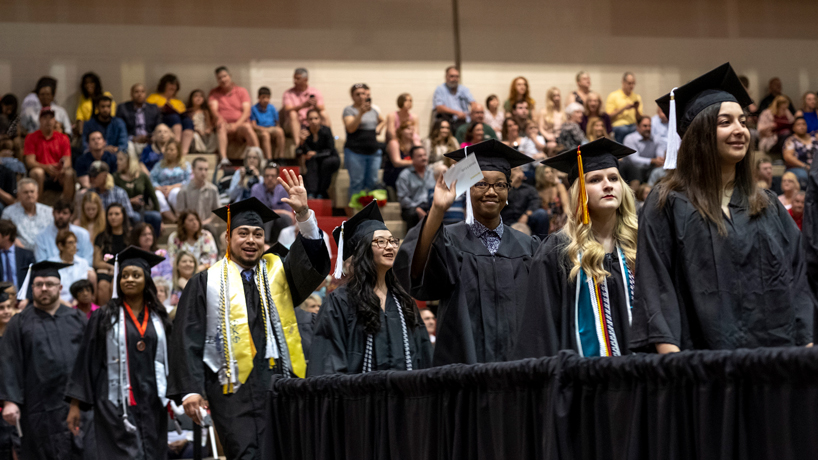 UMSL’s six-year graduation rate is 5 percentage points higher than would be expected given the rates of other institutions with similar student body characteristics, according to a study published in the New York Times. Nearly 1,500 students earned their UMSL degrees this spring.

The University of Missouri–St. Louis prides itself on being a high quality, affordable educational option for a diverse array of students. It’s right there in the vision statement: “We boldly assert that education is for everyone who is willing and able to seek it out.”

The success of UMSL’s students in earning degrees that set them up to be competitive in the workplace was recognized in a recent New York Times study that found UMSL’s six-year graduation rate is 5 percentage points higher than expected given the rates at universities with similar student demographics.

The study, undertaken by the Times in conjunction with the Urban Institute’s Center on Education Data and Policy, surveyed the most recent graduation rate data available for 368 higher education institutions in the U.S. The researchers matched those rates up with the average rates of other schools with similar student bodies – including the students’ income, race, gender, age and standardized test scores – to see which colleges were over- and underperforming their expected graduation rates.

UMSL, with an expected graduation rate of 60 percent and an actual rate of 65 percent, was the only one of eight institutions from the state of Missouri surveyed that overperformed its expected rate. U.S. News & World Report also recognized UMSL in the fall as an “A+ School for B Students,” a list that highlights colleges that show desirable outcomes for students entering with average test scores and high school class ranks.

“We strive to be a place where students of all backgrounds can come to transform their lives,” said Kristin Sobolik, provost and executive vice chancellor for academic affairs. “The emphasis we have placed on student success and the support structures we have in place to ensure we maintain an inclusive and academically supportive environment are evident in the encouraging trends we see in retention, persistence and degree completion among our students.”

UMSL celebrated a new class of nearly 1,500 students who earned their degrees this spring at commencement ceremonies May 17-19, another infusion into a St. Louis workforce that sees more than 72 percent of UMSL alumni stay to live and work in the area after graduation.