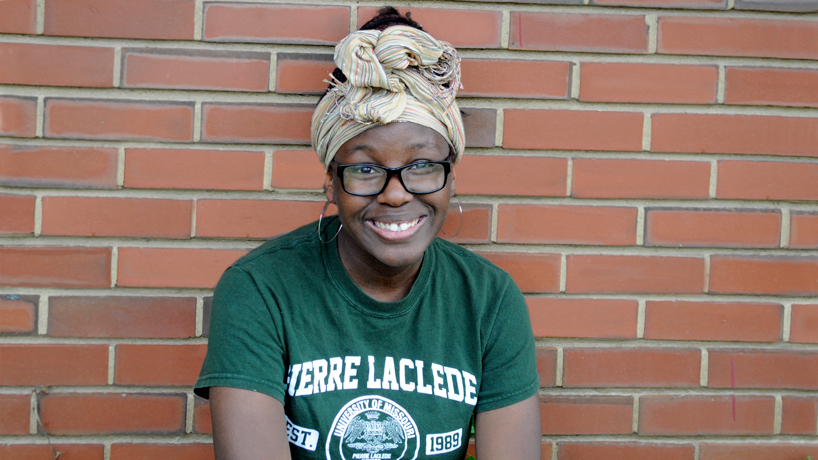 Sophomore Lucy Grimshaw, a double major in public policy and administration and social work, was one of 290 students nationwide selected to take part in the New Civic Fellowship program in the 2020-21 academic year. (Submitted photo)

It’s true the dean of the University of Missouri–St. Louis’ Pierre Laclede Honors College was the one who tipped Grimshaw off about the opportunity and encouraged her to apply, even helping her fine tune her resume and personal statement earlier this semester.

But in his mind, Grimshaw was an obvious candidate based on everything he’d learned about the fellowship from watching another Honors College student, Danielle Friz, take part in it this year.

“Lucy’s big goals in life are about social justice, and she’s particularly interested in inequalities in the African American community and issues of incarceration,” Munn said. “It was a perfect fit, so it was really easy. I knew her and I knew the fellowship, and it was just getting them together.”

Campus Compact created the year-long program for students at its 1,000-plus member institutions who have demonstrated leadership on their campuses and a commitment to finding solutions for challenges facing communities locally, nationally and internationally. The fellowship was named for Frank Newman, one of the coalition’s founders and a tireless advocate for civic engagement in higher education.

Grimshaw, a sophomore double-majoring in public policy and administration and social work, is joining 289 other students in the new cohort. They hail from 39 states plus Washington, D.C., Greece, Lebanon and Mexico.

The students will receive training and resources to help nurture them and their passions and help them develop strategies that prepare them for long-term work addressing public policy problems and helping to build more equitable communities.

“I think this will be a great opportunity to learn from people who are far ahead of me – learn from them about how I can be a better public servant – and then also get to connect with other people who are serving around the country,” Grimshaw said. “There are people from big colleges, small colleges. It’s all about getting to connect with them and getting to hear how they serve.”

Grimshaw’s own experience has consisted of volunteering with Girls on the Run, Big Brothers Big Sisters and UMSL Students of Service, as well as participating in the Emerging Leaders Program as a freshman and graduated from the Advanced Leaders Program as a sophomore. She’s been mentoring two emerging leaders this semesters while also serving as a senator in the Student Government Association this year.

Her commitment to social justice and civic engagement began long before she started college and was fostered by her mother, who adopted Grimshaw when she was 19 months old.

Grimshaw grew up in Creve Coeur, and her mother homeschooled her, exposing her to Martin Luther King Jr. and other civil rights heroes from a young age. She also took Grimshaw to volunteer at homeless shelters with their church so she could see firsthand that there were people in the world who had less than she did.

The importance of looking out for those less fortunate was reinforced at home while growing up alongside her brother, Gideon, who has special needs.

Grimshaw points to the shootings of Trayvon Martin and Michael Brown in 2012 and 2014, respectively, as moments that shook her and forced her to lose some of her innocence. She remembers working with her church to gather food resources and help people in Ferguson amid the unrest that followed Brown’s death.

“That was really when I got interested in how the law disproportionally affected people who may be in the minority,” Grimshaw said. “That’s when I realized that I wanted to bring awareness and help those people – the people who may not be well represented.”

Grimshaw is still not sure what form that work will take.

She’s long thought about going to law school after she completes her bachelor’s degree. She’s also felt a strong pull toward social work, inspired by faculty members such as Sha-Lai Williams and Courtney McDermott, whom she joined on a Spring Break Civil Rights Tour through the southeastern United States in 2019.

“Just getting to hear their wisdom and seeing how they want to change the world through understanding and looking, not through their own eyes but trying to put themselves in other people’s shoes, is absolutely astounding and amazing to me,” said Grimshaw, who appeared with both professors on ‘St. Louis on the Air’ in January to talk about the Civil Rights trip.

Grimshaw is hoping being part of the Newman Civic Fellowship will help her see what direction she’d like her work to take – perhaps marrying her interest in social work and law. Not only will she get to network with peers at other institutions and learn about their interests, but she’ll also be pursuing projects of her own with Munn acting as her mentor.

One possibility is to focus on the issue of incarceration. Another would be to work an initiative related to the COVID-19 pandemic, which has hit particularly hard in north St. Louis County.

Grimshaw has a few months to think it over and formulate a plan before the fellowship officially begins in September.

“I think it’ll give her a lot of clarity about what she wants to do next,” Munn said. “Her commitment to public service is already super strong. I don’t think that’s going anywhere. But I think it’s going to be really helpful for her to understand how she wants to move forward.”