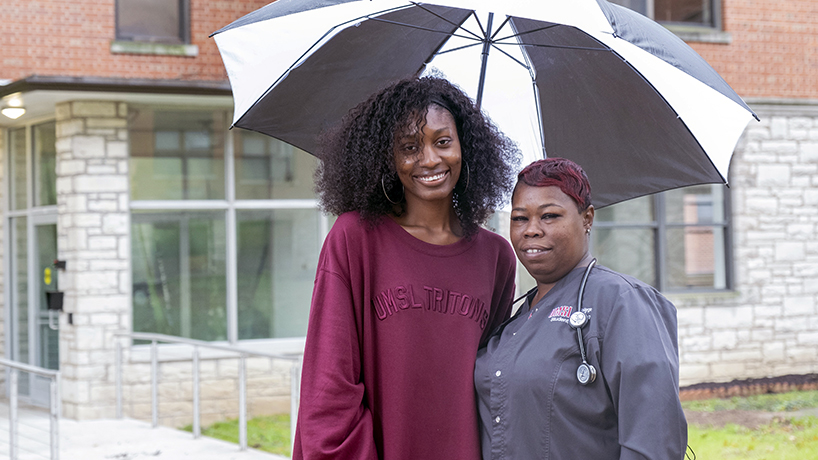 Getting blood drawn isn’t on the top of the list of favorite activities for most people. Anything that can make the experience a bit easier helps.

University of Missouri–St. Louis Accelerated BSN student Tiffany Nichols has been that something for countless students as a longtime medical assistant and phlebotomist for the Saint Louis University Student Health Center.

“Not a lot of people like to get their blood drawn, and it brought me joy that people actually would come in for me,” she said. “I enjoyed the people I worked with. I enjoyed the work that I did, and that’s what really made me want to be a nurse.”

Nichols decided to attend the UMSL College of Nursing, drawn by its close proximity to her home and the strength of its accelerated program. She was dismayed to find out, however, that she wouldn’t qualify for financial aid and reached out to Nursing Assistant Dean of Student and Alumni Affairs Colette Dixon looking for scholarship opportunities.

Nichols’ outreach paid off. Last month, the Black Nurses Association of Greater St. Louis named her and fellow BSN student Goodness Ohia Obioha as two of four recipients of the Edith L. Cole Scholarship. The BNA awarded $1,000 to Nichols and $1,500 to Ohia Obioha.

Open to both undergraduate and graduate nursing students, the scholarship is intended to benefit community-focused students, especially those who serve vulnerable or underserved communities. The BNA named the scholarship after Edith L. Cole to honor her as an active member instrumental in reviving the St. Louis chapter and serving as historian and parliamentarian until her death on Oct. 3.

Nichols, who says she was in “desperate need” of the scholarship, traces her interest in nursing back to several sources. As a young unemployed mother, she’d seen a commercial for the St. Louis College of Health Careers and realized she wanted to change her life.

“I was like, ‘This is not working,” Nichols said. “I need a career instead of a job.”

She enrolled, earned her associate degree and started working at SLU, where she went on to earn a bachelor’s degree.

Shortly after starting at SLU, Nichols’ daughter was diagnosed with Smith-Magenis syndrome, a developmental disorder caused by the deletion of one of her chromosomes, and developed epilepsy. Dealing with the medical visits and care her daughter needed was difficult for Nichols’ family.

“We spent countless days in the hospital,” she said. “It was always the nurse that came behind the doctor to make me feel a little better about the situations that we were facing.”

Those nurses made Nichols want to become a nurse, and she started nursing school, where her previous medical experience has served her well. Just like in her SLU job, her favorite parts have been interacting with people and getting hands-on experience.

The school’s commitment to ensuring students had in-person learning during the pandemic was one of the things Nichols was most impressed with. That’s something she especially appreciates having experienced different educational styles at many of the area’s higher learning institutions.

Describing herself as a “career student” and an “overachiever,” there’s little doubt that Nichols will continue to succeed in the accelerated program. What’s more in question is whether or not she can stop after earning her BSN.

“I feel like I literally have been nonstop going since 2012,” she said. “I want to just sit back and enjoy it a little bit. But then, what’s the point in stopping until I am at the top? We’ll see.”

The College of Nursing’s commitment to hands-on, in-person learning, even during the midst of the coronavirus pandemic, drew Ohia Obioha from California to UMSL.

But Ohia Obioha comes from much further away than the West Coast. She grew up in Nigeria, coming to the U.S. after secondary school. She first heard of UMSL Nursing from a close friend from Nigeria, and the more she looked into the school’s rankings and reputation, the more she realized it could be for her.

“I feel like everything was directed by God,” she said. “Never in a million years, would I have thought that I would end up here. I would not have even considered the idea of coming to Missouri because it’s just so far away. So far, everything has been great.”

Ohia Obioha became interested in health care, specifically neurology after seeing a career tree of the medical professions. Originally interested in becoming a doctor, she did career research during high school and decided to start in nursing and see how she liked the profession.

Now a junior, having worked her way through the preclinical requirements, Ohia Obioha has found herself enjoying her clinical nursing education.

“I definitely love it,” she said. “This is the interesting part, and it’s also where you do a lot of work.”

Though she’s maintained her interest in neurology, Ohia Obioha discovered she also enjoyed oncology and emergency room nursing, drawn, respectively, by the intense patient connects needed and the unpredictability of the ER.

She’s also gotten involved on campus as a student assistant in the new Nursing Simulation Laboratories and in the Minority Student Nurses Association.

“I learned a lot and it also gave me the opportunity to be able to do things like donate to organizations I didn’t even know existed, and I was able to donate blood, too,” Ohia Obioha said. “I was able to be a blood donor for ImpactLife, which is really fulfilling.”

There’s been other opportunities since coming to UMSL that Ohia Obioha values, such as receiving scholarship funds from the university and now from the BNA. Writing the scholarship essays required her to dig deep and think about her goals for college and afterward.

She feels grateful for the funds and for the opportunity to apply.

For additional information on the scholarship and how to apply, contact Associate Professor Wilma Calvert.