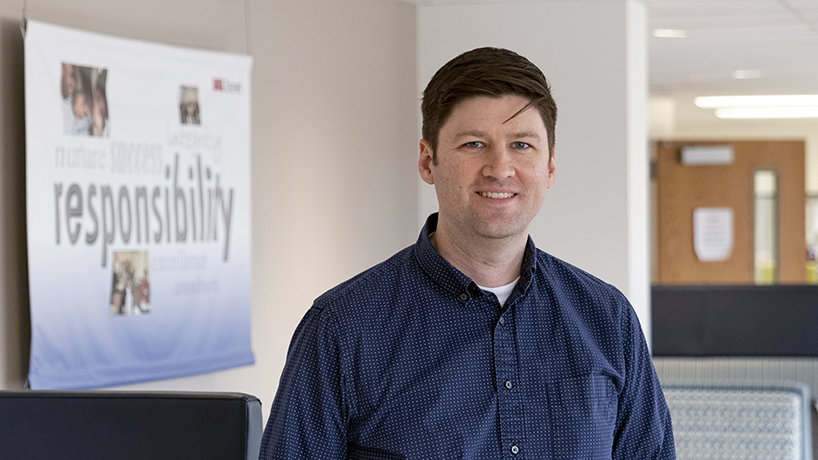 Assistant Clinical Professor of Optometry Patrick Stark recently completed the American Optometric Association Leadership Institute. Stark was one of approximately 100 optometrists from across the country to take part in the AOA’s inaugural program. (Photo by August Jennewein)

Patrick Stark’s entry into teaching hadn’t been in the plans.

The University of Missouri–St. Louis Assistant Clinical Professor of Optometry thought he’d earn his OD, go through residency and then start working with patients in a private practice or hospital setting.

“I kind of fell into it,” he said. “I realized it was more fun to work with students while seeing patients than seeing the patients by myself. So that was that was the big draw. It felt more like a team effort than me out there doing eyeball stuff alone.”

Stark, who graduated from the UMSL College of Optometry in 2012 and joined the faculty in 2016, tends toward understatement about his efforts and has a go-with-the-flow attitude about new possibilities.

Thus, when College of Optometry Dean Larry Davis emailed Stark an application for the inaugural American Optometric Association Leadership Institute, he went for it despite not having thought leadership was in the plans.

“I was lucky enough to get picked to be a part of it,” Stark said. “That was pretty exciting for me. I don’t usually think of myself as a leader in the traditional sense. But I think, as you progress in a career, it is an important thing to do. Especially since, as an instructor, I have to lead these students to become good optometrists and active in the profession.”

For Stark, the experience served as a “first step” for Stark in developing his leadership as an optometrist, which has driven him to redouble efforts toward advocacy and professional service.

The year-long AOA program aims “to energize and equip the next generation of champions for optometry, who will then be ready to step in and lead at all levels – local, state and beyond.” Goals include fostering emerging leaders, providing opportunities for growth for the participants, building connections among individuals in the profession and creating leadership opportunities at local, state and federal levels.

The AOA choose 100 optometrists from across the U.S., approximately two per state, to participate in the program. The organization broke those 100 down into four cohorts, each of which had several small working groups of about six individuals.

“I enjoyed them very much,” Stark. “Working with them was probably the highlight of it all. We really got to talk things out and figure out how to apply them. Hearing people talk is one thing, but then being able to kind of work on how it applies to different styles of practice and different personalities as well was really helpful.”

Over the course of the year, the groups covered four main topics: leadership brand, negotiation, public speaking and leading change. Working through the topics within his group and learning about different perspectives was the standout experience of the program for Stark.

He pointed to leadership brand as an example. His group, which spanned optometrists practicing in many different settings, had to imagine what leadership meant in private practice, academia and hospital settings.

For Stark, that means leading his students by example. The experience made him consider how he’s perceived by those around him, and he plans to work on becoming a more proactive leader.

Some of the topics covered and how they could relate to optometry surprised Stark. Take, for example, negotiation.

“I don’t often think about negotiation,” he said. “But almost everything is a negotiation. Any kind of transaction, or even most conversations, there’s a certain amount of negotiating going on. Certain negotiation strategies seemed really valuable, like coming at the other person from a point of empathy and trying to understand what they need.”

The topics often overlapped, as with interactions with patients, which combines public speaking skills with the negotiation of working with people to get them to stick to a treatment plan.

Everything the groups discussed coalesced into the final topic, leading change. For Stark, that was new.

‘It’s not usually something I think of myself doing,” he said. “It was almost like a step into that leading change kind of a role. But I do think it’s important. The AOA does a lot of work for optometrists across the country, as do the state associations. We need people to help.”

Stark would like to be one of those people. He started working with the AOA and the Missouri Optometric Association while a student at UMSL and has continued to do so as a practicing optometrist and faculty member.

He hopes to join the state committee soon and will be giving a talk for paraoptometrics at the upcoming MOA meeting.

“That’s kind of my starting point,” Stark said. “That’s an important part of your career, in addition to seeing patients, there’s things you should be doing for the profession. This AOA program is a great idea, and it’s a way of making us all better.”