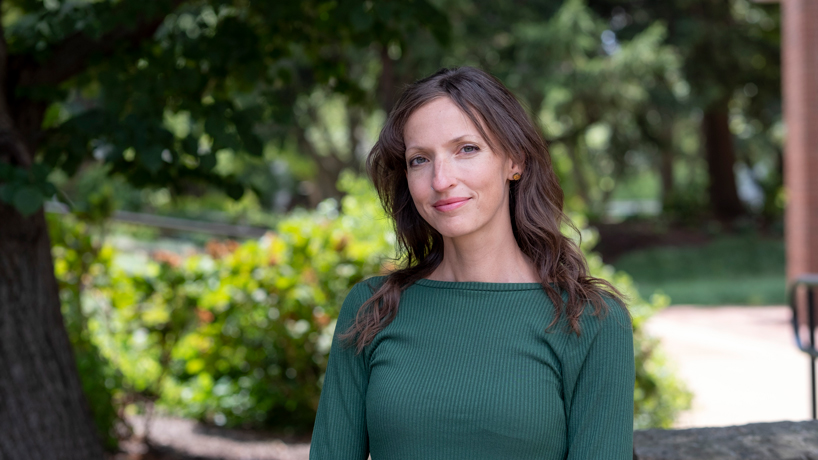 Annah Bender, assistant professor of social work, joined co-hosts JJ Janflone and Kelly Sampson on an episode of their “Red, Blue, and Brady” podcast released Feb. 25. Bender’s research interests include intimate partner violence, firearms access and the development of and recovery from mental health and substance use disorders among individuals with a history of trauma. (Photo by August Jennewein)

In light of the recent monthlong campaign, JJ Janflone and Kelly Sampson explored the intersection of gun violence and teen dating violence, as well as the lack of research on the topic, on their podcast, “Red, Blue, and Brady.”

The co-hosts regularly talk with academics, activists, politicians and survivors about the impact of gun violence in the United States on the podcast, which is affiliated with Brady: United Against Gun Violence. On the episode “Guns, Teen Dating Violence, and the CDC,” released Feb. 25, Annah Bender, assistant professor of social work at the University of Missouri–St. Louis, joined Janflone and Sampson to provide her expertise and perspective.

Bender’s research interests include intimate partner violence, firearms access and the development of and recovery from mental health and substance use disorders among individuals with a history of trauma.

“I really research all things intimate partner violence,” Bender said on the podcast. “I’m interested in how people enter and exit abusive relationships, how mental health is affected as a result of that and also how victims and survivors seek help and conceive justice.”

Like other forms of intimate partner violence, teen dating violence encompasses any physical, sexual or psychological harm or threat of harm toward a current or former romantic partner. Bender said that it is more prevalent than most people realize, noting some research estimates that 1.5 million teens experience an abusive relationship before reaching adulthood.

Bender explained that teen dating violence often looks different than adult intimate partner violence from the outside, making it more difficult to recognize.

“Teens who are dating, hooking up, are probably not living together as partners,” she said. “So, in some ways, there may be less ability for the abusive partner to control their partner financially or use kids as leverage. However, there may be other dynamics that are a little bit different in a teen dating relationship. There might be more use of social media to harass a partner. There does seem to be some evidence that teen dating violence is often more reciprocal or mutual than adult relationships, though we need better data on that.”

“The presence of a firearm in the home is very dangerous in a domestic violence situation,” Janflone said. “Half of all intimate partner homicides are committed with guns.”

There are age restrictions on purchasing some firearms such as hand guns, but minors can legally own rifles and shotguns in many states. In some communities, it’s also common for parents to purchase firearms as gifts for teenagers.

Bender said, at any age, the presence of a firearm exponentially raises the risk of accidental deaths and injuries, family violence, intimate partner homicide and suicide.

“Within a relationship violence scenario, whether it be adult intimate partner violence or teen dating violence, it’s an escalator,” Bender said. “There’s a conflict. There might be jealousy, a broken relationship, a betrayal. Maybe the gun is only there to threaten or intimidate initially, but all too often, it ends tragically.”

However, there are actions educators, mentors and parents can take to protect teens from gun violence and dating violence. Bender said the most important thing adults can do is regularly engage with teens, even if it can be difficult to talk about dating or potential abuse. Schools can also play a role in prevention by providing education on affirmative consent, healthy relationships and safe sex.

Toward the end of the episode, Sampson inquired why there is seemingly a dearth of research on gun violence among teens.

She further explained that the Dickey Amendment, passed in 1996 as a rider in the federal omnibus spending bill, mandated that “none of the funds made available for injury prevention and control at the Centers for Disease Control and Prevention may be used to advocate or promote gun control.”

The CDC interpreted it as a moratorium on research into gun violence. For more than 20 years, there was no funding for basic research on the topic, even during a period when mass shootings became more and more common.

“That moratorium had a chilling effect,” Bender said. “When the government indicates something – a social problem, a disease, a pathology – is not worthy of tax payer investment and research, scientists don’t study it because they can’t have their work supported, which is necessary in most academic institutions and think tanks to hang onto your job.

“It’s a clear signal at a broader level of what we value as a society, what we value as a country. So, it’s curious that we have this huge problem of gun violence, which affects so many of us, that it just isn’t deserving of notice, of researching, of funding and thus, policy priority.”

However, the 2018 mass shooting at Stoneman Douglas High School in Parkland, Florida, spurred action on the matter, and Congress clarified that research on gun violence wasn’t prohibited. In 2020, the CDC renewed its research efforts with $8 million in funding to 16 research groups across the country to study firearms injury prevention.

At the close of the discussion, Bender left listeners with something to think about.

“Many people bring guns into the home because they believe it makes them safer,” Bender said. “In fact, it makes them less safe. I think that’s the number one thing I would want people to know, especially for women to consider.”

Listen to the episode on Apple podcasts or on Spotify.