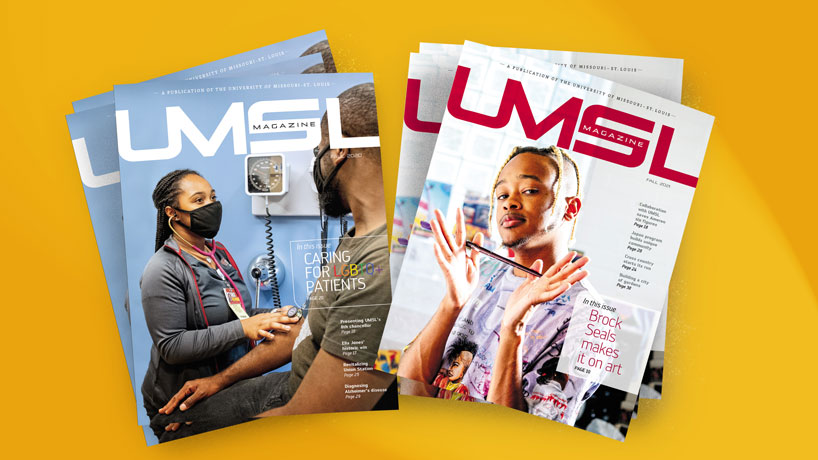 UMSL Magazine received two awards for editorial and design from the Council for Advancement and Support of Education.

The Council for Advancement and Support of Education has announced its 2022 Best of District VI Awards, and the University of Missouri–St. Louis Marketing and Communications Department took home four awards.

UMSL Magazine, which shares stories of excellence at the university with alumni and friends, was honored in two categories in a competition that featured institutions from the Mid-America region, which includes the states of Colorado, Iowa, Kansas, Missouri, Nebraska, North Dakota, South Dakota, Wyoming.

The magazine received recognition in the Magazines: Alumni/General Interest category for its work highlighting general interest stories that demonstrate the diverse successes of students, faculty, alumni and community partners of every circumstance and how their paths run through UMSL in pursuit of achieving their goals. The magazine is published twice a year, with a circulation of 113,250.

UMSL Magazine was also recognized for its design, winning an award in the Design: Magazines & Periodicals category. Although every issue produced is unique, certain design elements, sensibility, personality and layout structure create a cohesive “UMSL Magazine” look that helps demonstrate the accomplishments of the UMSL community and its partners. The goal is for UMSL Magazine to help build and maintain connections between the university and various stakeholders, and the magazine’s design helps create that connection.

“Top of the class: UMSL educators lead region forward,” a series written by Senior Public Relations Writer Burk Krohe, was honored in the Writing: News/Feature (Series or Collection) category. The series profiles UMSL alumni who are making waves in the St. Louis education ecosystem, highlighting how UMSL’s rigorous teacher preparation program is regularly producing award-winning, inspiring teachers and school leaders who are dedicated to making the St. Louis region a better place. Stories included profiles of two Missouri Teachers of the Year – 2021 winner Darrion Cockrell and 2022 winner James Young – as well as Eleanor Taylor, who connects to students and family history through language learning, and Alicia Leathers, who was named the middle school principal at Lift for Life Academy.

The series aimed to raise the profile of the university and increase the reach of the Marketing and Communications Department’s efforts, and several stories in the series generated local and national coverage, from KSDK, the St. Louis Post-Dispatch and St. Louis Magazine to CNN, Good Morning America, NBC News and People.

“An ideal fit for nontraditional students,” a series written by Director of Public Relations/Content Steve Walentik, was also honored in the Writing: News/Feature (Series or Collection) category. This series shared the stories of several nontraditional students who found success at the university, as the majority of UMSL students don’t follow the traditional path to earning their degree – they might enlist in the military, enter the workforce or start raising children before they enroll in school, for instance. Stories in this series included a recovering drug addict who’s worked as a behavior health coach, a grandfather in his 60s studying music after decades working in asbestos and another student who enrolled at UMSL right after giving birth to her son. The series also featured stories about two other students who earned degrees more than a decade after finishing high school – one in biology, the other in communication and media studies – and after a few detours in their academic journeys.

“I am incredibly proud of the creative works developed in our unit, which have consistently garnered national recognition from premier organizations such as CASE,” said Justin Roberts, associate vice chancellor for marketing and communications. “Our team is not only dedicated to showcasing the UMSL story, but is absolutely talented in its ability to shape a story, whether that is through the written word or through design. These recognitions demonstrate that ability and place our portfolio of work alongside many of the nation’s top public and private institutions.”