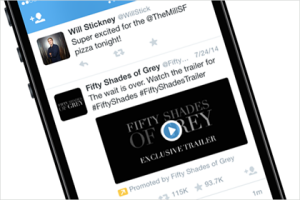 On Tuesday, Twitter made a big announcement on their blog that would impact advertisers and users alike. Twitter announced the beta test of Promoted Video on Twitter. They began testing their new Twitter Video Cards earlier this year, and reported high engagement and views in their blog post on Tuesday.
The addition of Promoted Videos will expand their already popular Twitter Amplify program. This is great for brands because it will allow them to more easily upload, distribute, and measure the engagement of their videos. As marketers, we all know how important having the right metrics is! For advertisers, Twitter is implementing a new Cost Per View (CPV) ad buying model for the new Promoted Videos.
What does this mean for you? It means that you will only be charged when a user starts playing the video instead of the number of impressions a video receives.
Check out the full announcement on the Twitter blog to learn more about the new Promoted Videos, including some new analytics features: Introducing Promoted Video on Twitter | Twitter Blogs.